A typical low-floor bus in the UK 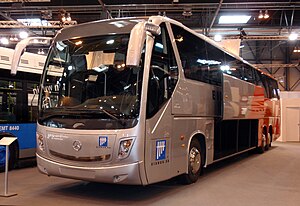 A bus is a large wheeled vehicle meant to carry many different persons along with the driver. It is larger than a car. The name is a shortened version of omnibus, which means "for everyone" in Latin. Buses used to be called omnibuses, but people now simply call them "buses".

There are many types of bus around the world.