George Fredrick Müller (German: Georg Friedrich Müller) (September 27, 1805 – March 10, 1898), was an Christian evangelist and worker of orphanages in Bristol, England. He cared for about 10,000 orphans in his life.[1] He was well known for giving an education to the children under his care, so much that sometimes he was accused of giving the poor more than they should be given.[1] 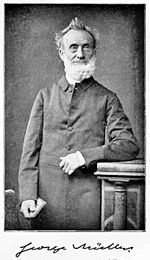 Müller was born in Kroppenstedt, a village in the Kingdom of Prussia. His early life he was not very righteous. He was a thief, a liar and a gambler. At age 14, while his mother was dying, he was playing cards with friends and drinking.[2] His father wanted to give him a religious education that would give him a wealthy job as a clergyman in the church. While studying divinity at college, a fellow student invited him to a Christian house meeting. He was welcomed there, and he soon began reading the Bible. He also began talking much with the others at the meetings. He soon left his sinful life, and began wanting to be a missionary. He began preaching in churches nearby. He still met with the growing group of evangelical believers in his university.

In 1828, Müller almost started working with Jews in England. But when he got there, in 1829, he fell ill. When he got better, he promises he would obey the will of God. He soon left London. He believed that God would provide for his needs as he did his Christian work. He became the pastor of a chapel in Devon. Soon after, he married Miss Mary Groves. While he was the pastor of the church, he would not take a regular salary. He also stopped renting pews for the church. He said that would give too much money to the wealthy.

He moved to Bristol in 1832. In 1834, he founded the "Scripture Knowledge Institution for Home and Abroad". It had the goal of helping Christian schools and missionaries. And also it gave away the Bible. He did not get any money from the government. He only accepting personal gifts. But still they received, and gave away £1.5 million ($2,718,844 USD) by the time of his death. It was mainly used for supporting the orphanages he worked at. But also they giving away nearly two million Bibles and other religious texts.

Müller and his wife began working with orphans in 1836. They then kept thirty girls in their own home. Soon after that, they opened three more orphanages. That made the total of children they cared for about 130. In 1845, as they got bigger, Müller decided that they would build another building for around 300 children. In 1849, that home opened. By 1870, more than 2,000 children were being helped in their five homes.

To this point, Müller had never asked for financial support,[3] and he did not go into debt. Even though their five homes cost over £100,000 to build. Many times, he would get free food donations only hours before it was time to eat. That helped his faith in God even more. Every morning after breakfast there was a time of Bible reading and prayer. Every child was given a Bible when they left the orphanage. The children had nice clothes. Müller even had a school inspector make sure things were done right. 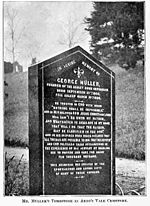 In 1871, an article in The Times stated that since 1836, 23,000 children had been educated in the schools. Also it said that thousands had been educated in other places that they paid for. The article also said that since he started, 64,000 Bibles, 85,000 Testaments, and 29,000,000 religious books had been made, and given away. They also had to pay the support of 150 missionaries.

In 1872, after the death of his first wife in 1870, he got married to Susannah Grace Sanger.[4] In 1875, at the age of 70, he began a 17 year period of missionary travel.[2] He preached in the United States, India, Australia, Japan, China, and nearly forty other countries.[3] He traveled over 200,000 miles, and that was before the airplane was invented. Because he knew several languages, he was able to preach in English, French, and German.[3] His sermons were translated into over twelve other languages.

He told in his autobiography how he came to closely read the Bible, he came with "great astonishment" to find that it was able to "speak decidedly" to him. He was a founding member of the "Open Brethren" movement.[5] In 1892, he went back to England. He later died on March 10, 1898.