In this Japanese name, the family name is Hasekura. 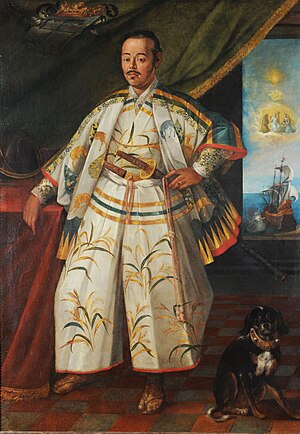 Hasekura Tsunenaga (支倉常長?, 1571–1622) was a Japanese samurai and diplomat.[1] He was the first diplomat from Japan to visit Spain, France, Italy and the Vatican.

The Roman Senate made Hasekura a citizen and a patrician of Rome.[2]

Hasekura was a retainer of Date Masamune. Date was the daimyo of Sendai.[3]

Hasekura headed a diplomatic mission from Japan to the Vatican. The trip lasted seven years from 1613-1620,[4] This historic journey is called the "Keichō Embassy" (慶長使節?).[5] Hasekura was the first Japanese ambassador in the Americas and in Europe. 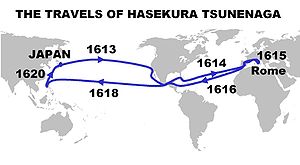 Hasekura in a fresco in the Quirinal Palace

Hasekura returned to Japan by crossing Mexico from east to west in 1618. The Japanese sailed from Acapulco for the Philippines. From Manila, they sailed north to Japan in 1620.[4]

The story of Hasekura was unknown in Japan until the 19th century.[6] This early diplomacy not included in official histories written in Japan in the 17th and 18th centuries.[1] Information about this embassy

Hasekura was a subject of interest in Europe. In 1615, Scipione Amati published a book about Haskeura's journey.[7] In 1616, a book about the Japanese diplomats was published in French in Paris.[8]

In 1873, Japanese diplomats traveled to Europe. They were surprised to learn about Hasekura. The diplomacy of Hasekura was forgotten because of the Sakoku policy of isolation.[6]

Many people in Coria del Río, Spain have the surname "Japón".[13] These are descendants of the Japanese travelers.[14]

Memory of the World Programme

Spanish and Japanese archives have documents from the Hasekura mission. The letter carried by Hasekura to the King of Spain is in Seville, Spain. The paper proof of Haskura's Roman citizenship is in Sendai, Japan. These bits of history are proposed for UNESCO's Memory of the World Programme.[16]