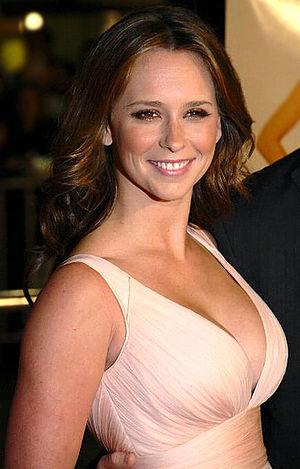 Jennifer Love Hewitt (born February 21, 1979) is an American actress and singer. She is most known for playing "Sarah Reeves" in the Fox television series Party of Five from (1995-1999), and as "Julie James" in the I Know What You Did Last Summer movies. She also played "Melinda Gordon" on the CBS television series Ghost Whisperer.

Hewitt was born in Waco, Texas. Her father is Herbert Daniel Hewitt and her mother was Patricia Mae (née Shipp, died 2012). She moved to Garland, Texas in 1987. Hewitt grew up in Killeen, Texas. After the divorce of her parents, Hewitt and her only sibling, Todd Hewitt, grew up with her mother.

As a young girl, Hewitt liked music. This led to her first encounters with the entertainment industry. At the age of three, she sang The Greatest Love of All at a livestock show. By the time she was five, Hewitt already had tap dancing and ballet in her portfolio. At the age of ten she moved to Los Angeles, California, with her mother for a career in both acting and singing.

After moving to Los Angeles, Hewitt was in more than twenty television commercials. Her first break came as a child actor on the Disney Channel variety show Kids Incorporated (1989–1991). Hewitt became a young star after getting the role of Sarah Reeves on the Fox Television show Party of Five (1995–1999). She joined the cast during its second season.

Hewitt's first movie role was in the independent movie Munchie (1992). Hewitt became very well known after a lead role in the horror movie I Know What You Did Last Summer (1997). She also played in the sequel I Still Know What You Did Last Summer (1998). Other movie roles included the high school comedy Can't Hardly Wait (1998) and the romantic comedy Heartbreakers (2001). In 2002, she worked with Jackie Chan in the action comedy The Tuxedo.

She has released four albums with some success, mostly in Europe and Japan. Her first album was released in Japan, where she is widely considered a pop star.