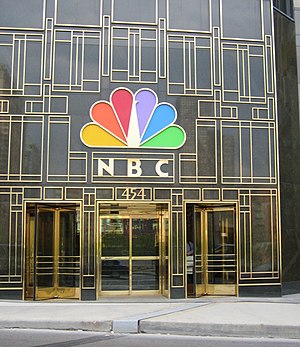 The NBC logo on a building in Chicago.

NBC, whose letters stand for National Broadcasting Company, is an American television network that started in 1926 as a radio company. NBC started airing Its first television programs in 1944. NBC is owned by Comcast, and was previously owned by General Electric and Universal Studios.[2] NBC owns the cable news channels CNBC and MSNBC.

It is nicknamed "The Peacock Network" because of the animal in its logo.

The network is famous for its three-note chimes, and NBC Sunday Night Football, which is the most watched TV series after American Idol. Some famous NBC shows are Saturday Night Live, The Fresh Prince of Bel Air, Law and Order, 30 Rock, Frasier, ER, Cheers, Will and Grace, Meet the Press, and Today.

A Little Late with Lilly Singh