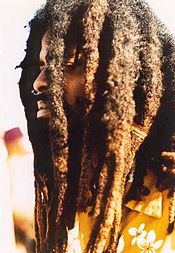 A Rastafarian (often called a Rasta) is a member of the Rastafari movement. Most Rastafarians live in the Caribbean, most notably Jamaica.

Rastafarians say that Haile Selassie I of Ethiopia, is Jah (shortened from Jehovah). They say that Jesus has returned again in the form of Haile Selassie I, or Jah, as he promised in the Bible, and he will deliver them to Zion, their name for paradise or Ethiopia.

There are several things that define a Rastafarian: they do not drink alcohol, they do not cut their hair, they spiritually smoke marijuana, they have a strict all-natural (often vegetarian) diet, and they believe in Jah and Zion.

Their diet is called I-tal derived from the word vital, and is something like Jewish kosher, but sometimes with no meat at all.

Dreadlocks are a common hairstyle of Rastafarians. For them, dreadlocks are an expression of spirituality: the term "dread" refers to a "fear of the Lord".

Naturality is an important part of the Rastafari way of life. They want to return to Africa and live naturally. They believe that smoking marijuana helps them to get in touch with Jah, and their way of life is improved when they practice meditation.

Many reggae musicians are part of the Rastafari movement, including the famous musician Bob Marley, who died in 1981. Rapper Snoop Dogg became a Rastafarian in 2012. He has made an album of reggae music.[1]