The flag of Liberia 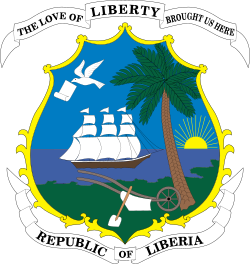 The coat of arms of Liberia

The Republic of Liberia is a small country on the coast of West Africa. It was founded in the early 19th century by the American Colonization Society because they didn't want black people who were not slaves to be in the United States.[1]

The name of the country means "Land of the Free" in Latin, and gained its independence on July 26, 1847. Many of the free people of color who were sent to Liberia were missionaries, and they were very cruel to the Indigenous peoples who were already living there.[2] Its official language today is English because of this history.

In the 1990s and in the early 2000s, two civil wars badly affected the country. There are about 3,300,000 people in Liberia. The capital city of Liberia is Monrovia.

The country's constitution is similar to that of the United States. In the fall 2017 elections, George Weah became the twenty-fifth President of Liberia. He was inaugurated on January 22, 2018. The President before Weah was Ellen Johnson Sirleaf, the first African female president.

For ships, Liberia is a flag of convenience.