James Strom Thurmond (December 5, 1902 - June 26, 2003) was an American politician. He was the oldest serving member of the United States Senate to date and the only senator to reach 100 while in office. He was also Governor of his home state South Carolina and a Presidential candidate. He was a lawyer.

Thurmond spent more than 70 year of his life on public career. Before World War II he served as state senator and judge. During war he served in the US Army in Europe and briefly in Asia. In 1960 he was promoted to the rank of major general.

From 1947 to 1951 he served as Governor of South Carolina (as a Democrat). During 1948 U.S. Presidential Election he became the presidential candidate of the Democratic Party faction called "Dixiecrat" (States Rights Democrat, mostly from the South) - people who supported racial segregation and opposed civil rights laws. Thurmond and his Vice Presidential candidate, Mississippi Governor Fielding Lewis Wright finished the race in 's3rd (behind Harry Truman and Thomas E. Dewey) with 39 electoral votes and they carried 4 states (Alabama, Louisiana, Mississippi and, of course, Thurmond's home state).

He was elected, as first write-in candidate for major national office, to the Senate in 1954. He was reelected for his first full term in 1956 and served until January 2003. He was originally a Democrat, but in 1964 he openly supported Barry Goldwater's presidential bid and became a Republican.

As the longest serving Republican he was President pro tempore of the United States Senate for three occasions (1981-1987, 1995-2001, and January 2001-June 2001), when Republican gained a majority. After Democrats took over the control of the Senate in June 2001 Thurmond became first honorary "president pro tempore emeritus". 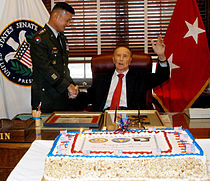 Started his career as opponent of racial integration, in his later years Thurmond supported desegregation.

After Thurmond's death in 2003, an attorney for his family confirmed that in 1925, when he was 22, Thurmond fathered a mixed-race daughter, Essie Mae Washington-Williams, with his family's housekeeper, Cassie Butler, then 16 years old. Thurmond paid for the girl's college education and provided other support.[2] Washington-Williams died in February 2013 at the age of 87.

Thurmond died in his sleep on June 26, 2003, at 9:45p.m. of heart failure at a hospital in Edgefield, South Carolina.[3][4] He was 100 years old. Then-Senator Joe Biden delivered a eulogy, and later to the family burial plot in Willowbrook Cemetery in Edgefield, where he was buried.