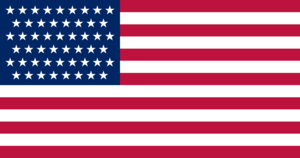 A U.S. 51 star flag has been created in case a 51st state actually joins the United States.

51st state refers to a place or territory that is not one of the 50 states of the United States, but people think about making it the 51st state. It is sometimes a joke term in American politics, and sometimes a realistic one. It is usually said about the possibility of Puerto Rico or other U.S. territories becoming part of the United States. When used to refer to other countries, it is a joke, usually about Canada. There have been attempts by people in the United States to get Canada to join them (like in the Articles of Confederation), but Canada has never taken up these offers.[1] It is also sometimes used to refer to countries that seem to be controlled by the United States. Before the year 1959 when Alaska and Hawaii became states, the sentence "the 49th state" was used.[2][3]

Places in the United States that are not states right now that might become the 51st state are the District of Columbia, Puerto Rico, Guam, the US Virgin Islands, American Samoa, or the Northern Mariana Islands. Besides admitting a new state, another type of proposal has been to form a 51st (or even 52nd) state by dividing a current state, such as the most-populous state (and third-largest state, geographically) of California into two or even three states, or Texas (the second-most populous) into four or five states. ,

Some regions of the U.S. that include land that is now in two different states and might become a new state include the "State of Jefferson" (Northmost California plus the southern counties of Oregon) and the "State of Lincoln" (Eastmost Washington State plus the northern panhandle of Idaho. A move has also been proposed to separate the westmost one-fourth of Nebraska from that state, but to add that to Wyoming (the least-populous state), rather than to create an entirely new state. This region is actually much closer to Cheyenne, Wyoming, the capital city, than it is to its current capital of Lincoln, Nebraska.

In 2012 and more recently in 2017, the people of Puerto Rico voted strongly in favor of becoming the 51st state, but the approval of the United States Congress is also needed.[4][5]

Guyana has also seen political movement favoring and advocating for it to become an American associated territory with eventual statehood as its goal.

Several Canadian Provinces as well as the whole of Canada have had political party’s and movements advocating American statehood making their North American location a natural candidate and ideal prospect.