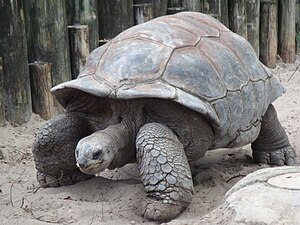 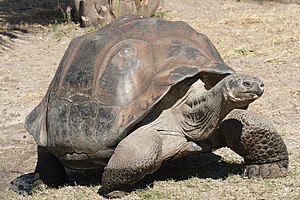 A Galapagos turtle, Chelonoidis nigra on the island of Santa Cruz.

Giant tortoises have evolved on a number of tropical islands. They can weigh as much as 3 or 400 kg (660–880 lbs) and can grow to be 1.3 to 1.9 m (4–5.9 ft) long (accounts vary). They live, or lived (some species are recently extinct), in the Seychelles, the Mascarenes and the Galapagos. Today, the world's largest population lives on Aldabra Atoll in Seychelles, where there are about 150,000 individuals. Although looking similar, the tortoises represent separate branches of evolution. The Seychelles and Mascarenes tortoises came originally from nearby Madagascar, while the Galapagos tortoises came from nearby Ecuador. Their similarity is an example of convergent evolution.

These tortoises are capable of living over 100 years in the wild. This makes them the longest-living vertebrates. The longest living survivor is 182 years old (probably).[1]

The Madagascar tortoise "Tu'i Malila" was 188 at death in Tonga in 1965. "Harriet" was reported by the Australia Zoo to be 176 years old when she died in 2006.[2] Also, on 23 March 2006, an Aldabra giant tortoise named "Adwaita" died at Alipore Zoological Gardens in Kolkata. He was brought to the zoo in the 1870s from the estate of Lord Robert Clive. He was around 255 years old when he died.

Around the time of its discovery, they were caught and killed for food in such large quantities that they became virtually extinct by 1900. Giant tortoises are now under strict conservation laws and are categorised as threatened species.

During the 16th and 17th centuries, the Galápagos were frequented by buccaneers preying on Spanish treasure ships. Filling a ship's hold with tortoises was an easy way to stock up on food, a tradition that was continued by whalers in the centuries that followed. "whaling skippers were almost lyrical in their praise of tortoise meat, terming it far more delicious than chicken, pork or beef". They said the meat of the giant tortoise was "succulent meat and the oil from their bodies as pure as butter, but best of all, the giants could hibernate in a ship’s damp for a year or more".[3]

At least five species of the genus Cylindraspis have gone extinct in historic times. They lived in the Mascarene Islands (Mauritius, Rodrigues and Réunion) in the Indian Ocean.

The Galápagos tortoise or Galápagos giant tortoise (Chelonoidis nigra) is the biggest living species of tortoise and the 10th-heaviest living reptile.

The tortoise lives in seven of the Galápagos Islands. The island is a volcanic archipelago about 1,000 km (620 mi) west of the Ecuadorian mainland. Spanish explorers, who discovered the islands in the 16th century, named them after the Spanish galápago, meaning tortoise.

Their shell size and shape are different between populations. On islands with humid highlands, the tortoises are larger, with domed shells and short necks. On islands with dry lowlands, the tortoises are smaller, with "saddleback" shells and long necks. Charles Darwin's observations of these differences on the second voyage of the Beagle in 1835, helped him to develop his theory of evolution.

The population of the Galápagos tortoise is getting smaller. There were over 250,000 individuals in the 16th century. In the 1970s, that number got smaller to around 3,000. The decline is believed to be caused by over-exploitation, habitat loss and introduced species to the islands such as rats, goats and pigs. Ten subspecies of the original fifteen survive in the wild. An eleventh subspecies (C. n. abingdoni) had only a single known living individual. It was kept in captivity. "Lonesome George" died in June 2012.

There have been many conservation efforts. Because of this, thousands of captive-bred juveniles were released onto their home islands. As a result, the population grew to 19,000 at the start of the 21st century. However, the species is still classified as "vulnerable" by the International Union for the Conservation of Nature (IUCN). 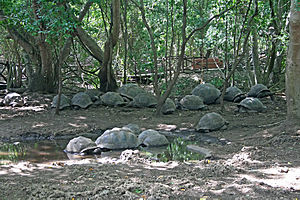 An isolated population resides on Changuu island in Zanzibar

The species is called Aldabrachelys gigantea or Dipsochelys dussumieri. The names refer to the same tortoise.