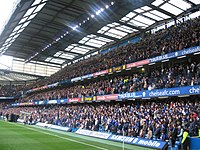 Chelsea F.C.[1] is an English football club that plays in England, starting in 1905. The club plays in the Premier League, and they play at the Stamford Bridge Stadium in London.

In 2003 the Russian billionaire, Roman Abramovich, purchased Chelsea and invested lots of capital to employ new football players. He also employed Luiz Felipe Scolari, as the manager of the club. Abramovich also employed Peter Kenyon as the chief executive to be responsible for the commercial strategies of the club. This made Chelsea more and more powerful, and they won the Premier League in consecutive years. A third straight FA Premier League title slipped through Chelsea's fingertips after their failure to defeat Arsenal at the Emirates Stadium meant that Manchester United had won their ninth league title in fifteen tries.

On September 20, 2007, the very successful manager José Mourinho left the club by "mutual consent". This exit came just days after a shockingly poor performance which saw them barely scrape out a 1-1 draw in a Champions League tie against Norwegian side Rosenborg B.K.. Following Mourinho's exit, Chelsea made Director of Football Avram Grant, the former manager of the Israel side from 2002 to 2006, the new manager of the club, until May 2008. Grant took over with Chelsea trailing in the Premier League "title race" behind Manchester United and Arsenal, and managed to keep Chelsea in the hunt for the league until the last game of the season. He got Chelsea into the Champions League Final for the first time as well as the Carling Cup Final, but he was sacked at the end of the season, along with assistant Henk ten Cate. Grant was sacked from the job after he lost in the final in a 5-6 penalty shootout loss to Manchester United and replaced by Luiz Felipe Scolari, the then-Portugal coach, in August. However, after a poor run of results Scolari was sacked on February 9, 2009. Guus Hiddink took over the club until the rest of the season. In early June they played in the FA Cup final against Everton,[2] where Chelsea won 2-1, after Frank Lampard and Didier Drogba scored goals. In that final, Louis Saha of Everton scored the fastest goal in FA Cup history, in 25 seconds. A week later, the former Milan manager Carlo Ancelotti was named as the new manager of Chelsea. Jose Mourinho is the cur rent manager.