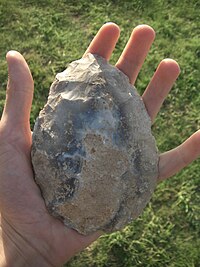 One of hundreds of handaxes found at Boxgrove

Scientists are not sure whether these remains are from a distinct species. They are fragments (small pieces of bones), and most cannot be dated exactly. In the older texts they were simply called archaic humans or "early Homo sapiens."[1][2][3]

There have been relatively well-defined remains of Homo erectus found in Africa from very early in human history.[4] There have also been well-defined remains of Homo neanderthalensis found in Europe from later in history. Some scholars use the terms "archaic humans," "early Homo sapiens," or Homo heidelbergensis to describe remains that seem to come from between these two periods in history. Some authors use it for all early species of Homo, including Neanderthals.

In 1907, an archaeologist found a fossil of a lower jaw in Mauer, near Heidelberg, Germany. Some scientists thought this lower jaw was so different from any other species that it belonged to an undiscovered species. They named this species Homo heidelbergensis.[5]

Later, archaeologists found remains in Arago, France, and Petralona, Greece, that they said were from Homo heidelbergensis. The best evidence found for these hominids is from between 600,000 and 400,000 years ago. The stone tools used by H. heidelbergensis were very similar to the Acheulean tools used by Homo erectus.[6]

They were good hunters

Cut marks on wild deer, elephants, rhinos, and horses show that H. heidelbergensis hunted, killed, and butchered these animals. Some of these animals weighed as much as 700 kg (1,500 lb) or more.

During this era, now-extinct wild animals like mammoths, European lions, and Irish elk lived on the European continent.

They may have buried their dead

Recent findings in Atapuerca suggest that H. heidelbergensis may have been the first species of the Homo genus to bury their dead. However, scientists still argue over whether this is true.[11]

Some experts believe that H. heidelbergensis, like its descendant H. neanderthalensis, learned a primitive form of language.[12]

Scientists have not found any forms of art or sophisticated artifacts made by H. heidelbergensis, other than stone tools. However, archaeologists have found red ochre, a mineral that can be used to create a red pigment which can be used as a paint. They found this possible paint at Terra Amata excavations in the south of France.

In 1994, British scientists unearthed a lower hominin tibia bone just a few miles away from the English Channel. They found the bone with hundreds of ancient hand axes, at the Boxgrove Quarry site.[13] A partial leg bone is dated to between 478,000 and 524,000 years old.

The tibia had been chewed by a large carnivore. This suggests two possibilities. The individual may have been killed by a lion or wolf. He also may have died of some other cause, and his unburied corpse may have been scavenged after his death.[14]

Beginning in 1992, a Spanish team has located more than 5,500 human bones that are at least 350,000 years old in the Sima de los Huesos site. This site is in the Sierra de Atapuerca, in northern Spain. The pit contains fossils of perhaps 28 individuals, together with remains of Ursus deningeri, other carnivores, and a biface called Excalibur.[15] Some scientists think that this Acheulean axe, made of red quartzite, was some kind of ritual offering for a funeral. If so, it would be the earliest known evidence of a funerary practice.[15]

Ninety percent of all known H. heidelbergensis remains have come from this site. The fossil pit bones include:[15]

Indeed, nearby sites contain the only known and controversial Homo antecessor fossils.

In 2005, teeth and flint tools from the water vole Mimomys savini, which is used to date other species, were found in the cliffs at Pakefield near Lowestoft in Suffolk, England. This suggests that hominins existed in England 700,000 years ago. These hominims may have been a cross between H. antecessor and H. heidelbergensis.[16][17][18][19][20]