Tito was born in Komrovec, Croatia, where his parents had a small farm.[4] He went to the village elementary school until 1905. In 1907 he was machinist's apprentice in Sisak. In 1910 he joined the union of workers and social-democratic party of Croatia and Slavonia. In 1913 he entered the Austro–Hungarian Army and later was imprisoned for anti-war propaganda. During World War I he was wounded, captured, then imprisoned by Russians.[4] After being set free, he became active in the bolshevik movement. After the October Revolution, he joined the Red Guards (Russia). In 1920 Tito came back to the new nation Yugoslavia and joined the Communist party. This was later renamed Yugoslav Communist League in 1952. Tito (Babo) was the leader of the Communist party from 1937 until his death. In 1921 the Yugoslav communist party was banned. Tito was imprisoned from 1928 until 1933 for being a communist.[4] In 1934 he went back to Soviet Union and he was involved as secret agent in NKVD.

In 1937 Broz came back to Yugoslavia and during World War II he, total supported by Anglo-Americans and Soviet armies, organized People's Liberation Army against the Axis powers and in civil war against Yugoslav Army in the Fatherland, Serbian State Guards, Croatian Home Guard, Slovene Home Guard. In 1945, Broz ordered the end of the Kingdom of Yugoslavia and created the Socialist Federal Republic of Yugoslavia with six republics: Bosnia-Herzegovina, Croatia, Macedonia, Montenegro, Serbia and Slovenia, and two autonomous provinces in Serbia: Vojvodina in the north, and Kosovo, next to Albania.

Tito with communist dictatorship, dramatically supported by spy ring OZNA and political police UDBA, ruled Yugoslav Republic from 1945 to 1980: he banned monarchy and all democrat parties.[5] He with other political personalities started Non-Aligned Movement. When he died the political situation was controlled by other chiefs of communist party. Later situation led to the break up of this Balkan country, and wars in Croatia, Bosnia, Serbia, Montenegro, North Macedonia and Slovenia during the 1990s.

On 7 January and again on 11 January 1980, Tito was admitted to the Medical Centre in Ljubljana, the capital city of the SR Slovenia, with circulation problems in his legs. His left leg was amputated soon afterward due to arterial blockages and he died of gangrene at the Medical Centre Ljubljana on 4 May 1980 at 3:05 pm, three days short of his 88th birthday. His funeral drew many world statesmen.[6]

Accusations of culpability are related with crimes perpetrated during WW II and during repression by Broz Tito's communist Yugoslav Republic command such as massacres of Foibe and Kočevski Rog butchery.[8][9][10][11] Mass graves are evidences of massacres;[12][13] accusations of genocide and ethnic cleansing by historians.[14][15] Accusations of culpability in the Bleiburg massacre, the repression of Croatia Catholic's Church, and the crackdown on the Croatian Spring or MASPOK.[16] Accusation of Vojvodina massacre consists in retaliation against Germans and Hungarians citizen and supposed Chetnik Serbs but some historians consider these incidents also ethnic cleansing against Germans and Hungarians because during World War II, the German minority in occupied Yugoslavia enjoyed a status of superiority over the Yugoslav population.[17] The AVNOJ Presidium issued a decree that ordered the government confiscation of all property of Nazi Germany and its citizens in Yugoslavia, persons of German nationality (regardless of citizenship), and collaborators. The decision acquired the force of law on February 6, 1945.[18] Other accusation of crimes committed against children.[19][20]

Broz Tito's repression involved many of the dictator's old friends such as Milovan Dilas and Vladimir Dedijer, who were both imprisoned but later wrote several books with gross accusations against him;[21] with criticism heaped on Broz Tito's lustful lifestyle: by 1974 he had 32 official residences, one of the ten richest men in the Balkans, a communist who lived like a king.[22] Broz Tito constructed huge personality cult around him.[23] 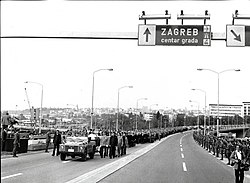 The funeral of Josip Broz Tito, President of Yugoslavia, was held on 8 May 1980, four days after his death on 4 May. His funeral was visited by many world statesmen, both enemies and allies.[6]

They included four kings, 31 presidents, six princes, 22 prime ministers and 47 ministers of foreign affairs. They came from both sides of the Cold War, from 128 different countries out of 154 UNO members at the time.[24]

Tito became ill over the course of 1979. On 7 January and again on 11 January 1980, Tito was admitted to the University Medical Centre in Ljubljana. His left leg was amputated soon afterward due to arterial blockages and he died of gangrene at the Medical Centre Ljubljana on 4 May 1980 at 3:05 pm, three days short of his 88th birthday.

The "Plavi voz" (Blue train, official presidential train) brought his body to the capital Belgrade and he laid in state in the Federal Parliament building until the funeral.