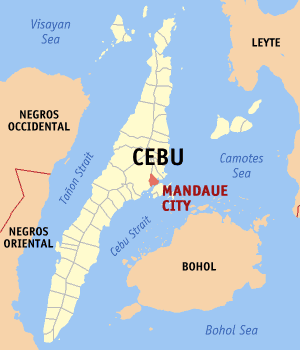 Mandaue City is a city in the province of Cebu in the Philippines. It is one of the three urbanized cities in the island and forms a part of the Cebu Metropolitan area.[1] Mandaue City is on the middle eastern coastal region of Cebu, bordering to its right-side are Mactan Island where Lapu-Lapu City is. Mandaue is connected to Mactan Island via two bridges which includes the Mactan-Cebu Bridge and Marcelo Fernan Bridge [2] And is bounded south and the west by the Provincial Capital, Cebu City and north by Consolacion which is linked with Cansaga Bay Bridge. The city has an area of about 34.87 square kilometres and has a total population of about 337,320 people.[3]

A community was established in Mandaue by a flourishing group of Indonesian, Malayan and Chinese merchants. The Venetian chronicler Antonio Pigafetta wrote a settlement called Mandani existed in the area with a chieftain who was named Aponoan[4] then a few decades later another ruler named Lambusan.[5] Mandaue was established as a mission village (which included present day Consolacion, Liloan and Poro) in 1638 by Jesuit then a century later by the Recollects.[6] The Philippine revolution in 1898 gave the town a new form of administration in accordance with the organic decree of the Central Revolutionary Government. The short lived revolution was overthrown by the American Troops and a battle nearly destroys the town on 1901.[7] Mandaue was Independent from being an American Commonwealth and a Japanese Garrison on July 4, 1946 along with the entire nation. Mandaue became a chartered city in June 21, 1969 by Mayor Demetrio Cortes Sr. The city was recognized as a HUC (Highly Urban City) on 1991.[8]

Mandaue City is part of the Sixth District of Cebu joined with the municipalities of Consolacion and Cordova. Although qualified for a lone district in 1991 this was neglected by Lawmakers. Mandaue is under the province of Cebu but because it is a Highly Urbanized City it is not under authority to the provincial government and Mandaue is politically subdivided into 27 barangays. The barangay is further divided to a sitio.

The city has a total land area of 3,487 hectares or 34.87 square kilometres. Every square kilometre is inhabited by more or less 8,112 people. Land utilization is summarized as follows:

The on-going North Reclamation Project, now known as the North Special Administrative Zone, currently has about 180 hectares reclaimed land. Of the 180 hectares, about 36 hectares belong to the city. The existing mangrove area will be retained as a Marine habitat, part of the area's parks and open spaces.

It is one of the two (the other one being the municipality of Consolacion) local government units located within the mainland Metro Cebu where the elevation of land is less than 100 metres.

Many of the areas of the city are extremely flat. About 77.37% is within the 0-8% slope category. Barangays belonging to this region are Centro, Looc, South Special Administrative Zone, Cambaro, Opao, Umapad, Paknaan, Alang-alang, Tipolo, Ibabao, Guizo, Subangdaku, Mantuyong, Maguikay and Tabok. The greater portion of the city, comprising about 70%, is dominated by the Mandaue Clay Loam soil series. This is in the 0-2% and 2-5% slope ranges. Faraon clay loam characterizes the rest of the land with slope range from 5-8% and up to 25-40%.[10]

A procession like this of the Senor Sto. Nino will parade to the National Shrine on the Translacion

Mandaue Fiesta:Celebrated on May 8 in honor of the patron St. Joseph. There are a lot of events that occur in this feast like the Miss Mandaue, Mr. Mandaue, Inter-Barangay Sports Competition, Queen Prince and Prices Coronation or QPP, Rodeos, Mantawi Festival, Bailes, Fairs and many more. This is an evident reminder of the Philippines Hispanic influences.

Translacion: (Gathering of the Holy Family) which coincidentally the patrons of Cebu are the Santo Niño and Birhin sa Guadelupe, Saint Joseph in Mandaue City. This is celebrated every January when the three statues meet in The National Shrine of Saint Joseph often called the Translacion where a Fluvial Mass follows after. There are singing and dancing competitions and street dancing that happen during the Bibingkahan in honor of the Sto. Niño.

Mantawi Festival : Is an event where tribal dances are accompanied by different beats and is played by a brass instead of the usual drum and trumpet Mantawi Festival is on every May 7.[13]

Miss Mandaue: A beauty pageant, that searches for a young woman who will serve as an ambassadress of goodwill and represent the people of Mandaue City in various functions and gatherings in the community...[14]

Pasigarbo sa Sugbo: It is an event that is held annually in Mandaue City, Cebu International Convention Center every August 14 which shows Cebu’s culture and different festivals, it is a fiesta of colorful costumes and elaborate props as dancers from 32 towns and cities from all over Cebu compete which ends with a grand fireworks display. 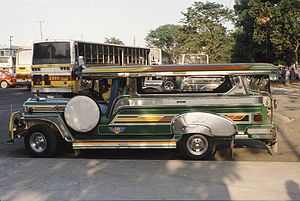 Mandaue City's road network is composed of a national highway which connects the city to its neighboring cities and municipalities, a national secondary road which traverses the City's metropolitan area. The total length of the city road network (paved and unpaved) and the four bridges, is about 133,676 kilometres, broken down into:

Land transportation is being served by PUJ, Utility Vehicles, mini-buses, multi-cabs, tricycles, trisikads and for cargoes, trailers and vans. Sea transport of Mandaue is highly dependent on Port of Cebu and Cebu International Port, because of the city's proximity to these facilities. Likewise, air transport is through the Mactan-Cebu International Airport has direct international flights to Hong Kong, Singapore, Japan, China, Palau, Malaysia, Taiwan, Qatar, South Korea and other key Philippine Cities, via the two Mandaue-Mactan bridges.[15] Wicker Chairs are one of the cities specialties.

Mandaue has dining restaurants which cater gourmets and international cuisines like Italian, Japanese, Korean, Mexican, Vietnamese, Indian and other cuisines. A variety of restaurants also serves meals of local cuisine.

Many famous Cebuano meals like the Lechon[19] or Inasal is a pride of Cebu being crowned as the best roasted pig in the world, it is eaten with Achara or pickled vegetables. The Sugba or Barbecue is either Isda(fish), Baboy (pork), Manok (chicken) or Baka (beef) is found in any joints in Mandaue eaten with the Puso a diamond shaped hangged rice covered in coco leaves. Kinilaw[20] is raw meat usually pork or fish drenched in vinegar and salt. The Buwad or dried seafood is very smelly but it is crunchy and chewy. There are some exotic meals you can find like the Dinugoan or pig's blood is a eaten like the soup. Barbecued Chicken feet are liked by many locals. + Original cuisine in Mandaue includes the Bibingka[21] which is steamed rice cakes mixed with coconut and sometimes egg. Binangos a type of salted fish only found in Mandaue.[source?]