Order of the Companions of Honour 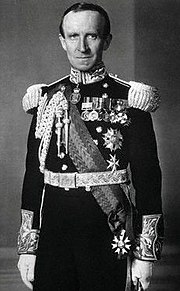 The Order of the Companions of Honour is a British award given to citizens of the Commonwealth. It was founded by King George V in 1917, as a reward for outstanding achievements in the arts, literature, music, science, politics, industry or religion.

The order is limited to 65 Companions of Honour. At first 45 members could be from the United Kingdom, 7 from Australia, 2 from New Zealand and 11 from other Commonwealth countries. Foreigners from outside the realm may be added as "honorary members". Membership of the order gives no title, or precedence, but recipients can put the post-nominal letters "CH" after their names.

The insignia of the Order consists of an oval medallion with an oak tree, a shield with the royal arms hanging from one branch, and on the left a mounted knight in armour. The badge's clear blue border bears the motto IN ACTION FAITHFUL AND IN HONOUR CLEAR. Men wear the badge on a ribbon (red with golden border threads) around their necks, and women on a bow at the left shoulder.