Radovan Karadžić (Serbian Cyrillic: Радован Караџић; born 19 June 1945 in Petnjica, Montenegro, Yugoslavia) used to be a Bosnia and Herzegovinian politician. He was in charge of part of the Bosnian Genocide. From 1995 to 2008, he was a fugitive. He was arrested on 21 July 2008 in Serbia. In 2016, he was convicted of war crimes.

Karadžić's father was in prison for most of his son's childhood. During World War II, Yugoslavia had been taken over by Nazi Germany and the other Axis countries. Karadžić's father had been a member of the Chetniks. This was an army that supported Yugoslavia's original government. Because he was in this army, he was put in prison after the war.[5]

Karadžić moved to Sarajevo in 1960 to study psychiatry at the Sarajevo University School of Medicine.[6] In 1970, he studied anxiety and depression at Næstved Hospital in Denmark. From 1974 to 1975, he got more medical training at Columbia University in New York City.[7]

After he returned to Yugoslavia, Karadžić worked in the Koševo Hospital (the main hospital in Sarajevo).[8] He was also a poet. Another Serbian writer encouraged him to go into politics.[9]

Pictures taken when Karadžić was arrested in 1984

While he was working in the Koševo Hospital, Karadžić made extra money in illegal ways. For example, healthcare workers who wanted to retire early would pay him to say they were disabled. Karadžić would also lie for prisoners who wanted to avoid punishment by saying they were insane when they committed their crimes.[10]

In 1983, Karadžić started working at a hospital in a suburb of Belgrade called Voždovac. With his partner, Momčilo Krajišnik, Karadžić got a loan that was meant to be used for improving agriculture. Instead, he and his partner used the money to build themselves houses in Pale. Pale was a Serb town above Sarajevo that the government had turned into a ski resort.[10]

On 1 November 1984, the two were arrested for fraud. They spent 11 months in jail before their friend Nikola Koljević paid their bail so they could get out.[9][10] On 26 September 1985, Karadžić was sentenced to three years in prison for embezzlement and fraud. However, since he had already spent over a year in prison, the court did not make Karadžić spend the rest of his sentence in prison.[11]

In 1989, Karadžić helped create the Serb Democratic Party (Srpska Demokratska Stranka) in Bosnia and Herzegovina. The party's goal was to bring together the country's Bosnian Serbs.

In September 1991, the Srpska Demokratska Stranka (SDS) began to create areas in Bosnia-Herzegovina that were ruled only by Serbs. On 15 October 1991, the Bosnian parliament voted that they wanted to rule themselves. Nine days later, a separate Serb Assembly was created, to represent only the Serbs in Bosnia and Herzegovina.[12]

On 9 January 1992, the Bosnian Serb Assembly said they had created a new country: the Republic of the Serb people of Bosnia and Herzegovina (Република српског народа Босне и Херцеговине/Republika srpskog naroda Bosne i Hercegovine). On 28 February 1992, the Serb Republic approved its constitution. It also said that it now controlled:[13]

On 6 and 7 April 1992, Europe and the United States accepted that Bosnia was an independent country.[16][17] Bosnia became a member of the United Nations on 22 May 1992.[18] Karadžić was voted President of this Bosnian Serb government around 13 May 1992. His powers included being in charge of the country's army.

As the head of the Bosnian Serb army, Karadžić was in charge of a campaign to get rid of all the Bosnian Muslims and Croats from villages that the Serbs wanted for themselves.[19]

In 1995, the International Criminal Tribunal for the former Yugoslavia (ICTY) indicted Karadžić for committing war crimes against non-Serbs. The ICTY accused Karadžić of ordering the Srebrenica massacre in 1995, where Karadžić's army murdered more than 7,500 Muslims.[19][20][21] They also accused him of many other crimes, including:[22][23] 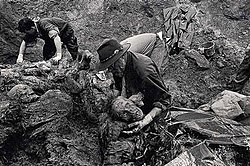 Karadžić ran away so he could not be tried for these crimes. Until 2008, he hid. The United States government offered a $5 million reward for his arrest.[24]

Karadžić was arrested on 21 July 2008 in Belgrade.[25] He had been pretending to be a doctor of alternative medicine, mostly in Belgrade but also in Vienna, Austria.[25][26] Karadžić was sent to an ICTY jail in the Hague on 30 July.[27]

Karadžić said that the United States government had protected him while he was hiding, and this was why it took over ten years for him to be found.[28][29]

Karadžić first appeared before a judge at the ICTY began on 31 July 2008.[30] At that time, the ICTY had found 64 people guilty of war crimes, crimes against humanity, or genocide during the Yugoslav Wars.[31]

The film The Hunting Party was based on Karadžić's life as a fugitive.

On 24 March 2016, Karadžić was found guilty of genocide, war crimes, and crimes against humanity. He was sentenced to 40 years in prison.[32]

Karadžić was found guilty of genocide for the Srebrenica massacre. He was also convicted of persecution, extermination, deportation, ethnic cleansing, and murder.[19]