The president is indirectly elected by the people through the Electoral College to a four-year term, and is one of only two nationally elected federal officers, the other being the Vice President of the United States.[9] A president must receive more than 270 electoral college votes in order to win an election. Ronald Reagan received 525 votes which is the most electoral votes of any other president.

If the president dies or retires between elections, or is otherwise removed from office, the Acting President will become president, who is usually the Vice President.

Andrew Johnson, Bill Clinton and Donald Trump are the only presidents to have been impeached.

Main page: List of presidents of the United States 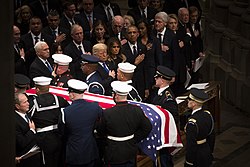 On the other hand; James Buchanan, Warren G. Harding, Herbert Hoover, Lyndon B. Johnson, Richard Nixon, Jimmy Carter, George W. Bush and Franklin Pierce are thought to be the worst.

Presidents who held other offices

Since Herbert Hoover, each president has created a institutional place known as a presidential library for preserving and making available his papers, records, and other documents and materials. There are currently thirteen presidential libraries in the NARA system.