KidzSearch Safe Wikipedia for Kids.
(Redirected from Yo Yo Ma)
Jump to: navigation, search

Yo-Yo Ma (born 7 October 1955) is a French-born Chinese American cellist. His family name is “Ma”, so his full Chinese name is “Ma Yo-yo”. Yo-Yo Ma is one of the world’s greatest cellists. He plays many kinds of music, not just classical, and he has performed for three presidents of the United States.

Yo-Yo Ma was born in Paris. His parents were Chinese. His mother, Marina Lu, was a singer, and his father, Hiao-Tsiun Ma, was a professor of music. His family moved to New York when he was four years old.

Ma began studying violin when he was very small. He also played the viola for a short while, then, at the age of four, he started the cello. He was a child prodigy and began performing to audiences at the age of five. When he was seven he performed to President John F. Kennedy . At the age of eight he appeared on American television in a concert conducted by Leonard Bernstein. By the time he was fifteen, Ma had graduated from Trinity School in New York and appeared as a soloist with the Harvard Radcliffe Orchestra playing Tchaikovsky’s 'Variations on a Rococo Theme.

Ma studied at the Juilliard School of Music. His teacher was Leonard Rose. He went to Columbia University and then Harvard University. At one time he had doubts about whether he should continue his studies, but in the 1970s he was inspired by the recordings of Pablo Casals.

By this time he had played with several of the world's great orchestras. His recordings and performances of the Johann Sebastian Bach: Cello Suites recorded in 1983 and again in 1994-1997 have been particularly praised. He has also played lots of chamber music, often with the pianist Emanuel Ax whom he had met at the Julliard School of Music.

Ma married in 1977. The couple have two children. They live in Cambridge, Massachusetts. 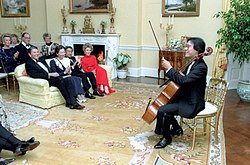 Ma is interested in music from different cultures. He has a group called Silk Road Ensemble which tries to bring together musicians from different countries which are historically linked by the Silk Road. H records on the Sony Classical label.

Yo-Yo Ma has owned several beautiful cellos. The cello called Domenico Montagnana 1733 cello (nicknamed ''Petunia'') was made in 1733 in Venice. It is worth more than US$2.5 million. In 1999 he accidentally left it in a taxi but fortunately it was found again. Another of Ma's cellos, the Davidov Stradivarius, was once owned by Jacqueline du Pré who left it to him when she died. He also owns a cello made of carbon fiber by the Luis and Clark company of Boston.

Yo-Yo Ma has played for the soundtracks of many famous movies. He also has made over 75 albums, 15 of which are Grammy Award winners. 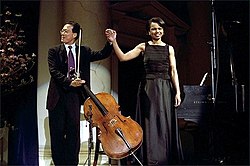 Ma has appeared in an episode of the animated children's television series, Arthur (in which D.W. kept calling him "Yo Ma-Ma") as well as several other television programmes including The Simpsons. Ma performed a duet with Condoleezza Rice at the presentation of the 2001 National Medal of Arts and National Humanities Medal Awards. He made a programme about Bach: Six Suites for Unaccompanied Cello.

On 11 September, 2002, a year after the attack on the World Trade Center, he played his cello on the site of the building while the first of the names of the dead were read in remembrance. Ma was named Peace Ambassador by the United Nations in January 2006.

He performed John Williams' "Air and Simple Gifts" at the inauguration ceremony for Barack Obama on January 20, 2009 together with the violinist Itzhak Perlman, the pianist Gabriela Montero and the clarinettist Anthony McGill.