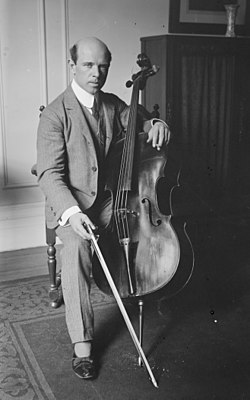 Pau Casals i Defilló (Pablo Casals) (born El Vendrell, Catalonia, 29 December 1876; died San Juan, Puerto Rico, 22 October 1973) was a Spanish Catalan cellist. He is generally thought of as the greatest cellist of his time {{fact|date={{subst:CURRENTMONTHNAME}} {{subst:CURRENTYEAR}}}}. He made the cello popular as a solo instrument and inspired many cellists {{which ones?}} of the younger generation. In his later years he was also a conductor as well as a composer.

Casals made many {{how many?}} recordings of solo, chamber, and orchestral music. Perhaps his best known recordings are the ones he made between 1936 and 1939 of the Cello Suites by Bach. When the dictator General Franco started to rule Spain he felt very strongly about the political situation {{fact|date={{subst:CURRENTMONTHNAME}} {{subst:CURRENTYEAR}}}}. When the democratic party was defeated in 1939 he said that he would never go back to Spain until democracy had been restored. He did not live long enough to see the end to Franco’s rule, which happened two years after his death, with the death of Franco.

Casals' father was the organist at the local church. He gave Casals his first music lessons, teaching him piano, violin and organ. When Casals was eleven, he heard a group of travelling musicians playing music {{fact|date={{subst:CURRENTMONTHNAME}} {{subst:CURRENTYEAR}}}}. One of the instruments was the cello. He had never heard one and he decided that was what he wanted to play. His mother took him to Barcelona, where he went to a music school: the Escola Municipal de Música. There he studied the cello, music theory and piano.

One day, when he was 13, he was looking at some old music in a second-hand music shop. He found some very old music for solo cello. They were the Cello Suites by Bach. People in those days thought they were just a collection of studies to help cellists with their technique, but Casals, although only still a boy, realized it was great music. He spent the next 12 years practising them until he felt ready to perform them. Casals’ discovery of these wonderful Cello Suites was the most important Bach discovery since 1829 when Mendelssohn found and performed the St Matthew Passion which the world had forgotten about.

Casals showed enormous talent for the cello {{according to who?}}. On 23 February 1891, when he was 14 years old, he gave a solo recital in Barcelona. He graduated from the Escola with honours two years later.

In 1893, the Spanish composer Isaac Albéniz heard him playing in a trio in a café {{fact|date={{subst:CURRENTMONTHNAME}} {{subst:CURRENTYEAR}}}}. He gave him a letter which allowed him to be introduced to the Queen. She gave him money so that he could study at the Conservatory in Madrid. She then allowed him to go to Brussels to study at the Conservatory which was then the best in Europe for string instruments. The cello teacher mentioned a long list of cello pieces and asked him which ones he played. When Casals told him he could play them all, the teacher made fun of him. When Casals started playing, everyone was amazed at his talent. The teacher wanted him to be one of his pupils, but Casals had been insulted and so he went to Paris the next day. The Queen of Spain was angry with Casals when she heard what had happened and stopped sending him money {{fact|date={{subst:CURRENTMONTHNAME}} {{subst:CURRENTYEAR}}}}.

In Paris he had very little money. He earned a living by playing second cello in the theatre orchestra of the Folies Marigny. His mother tried to earn some money by sewing. In 1896, he returned to Catalonia where he taught at a music school and played principal cellist in the orchestra of Barcelona's opera house, the Liceu. In 1897 he appeared as soloist with the Madrid Symphony Orchestra, and was awarded the Order of Charles III from the Queen.

In 1899, Casals played the Saint-Saëns Cello Concerto at Crystal Palace in London, and later for Queen Victoria at her summer home at Cowes, Isle of Wight. He was becoming very famous. In Paris he make a great impression on everyone, especially the conductor Charles Lamoureux who had started a famous orchestra. Casals went to the Netherlands, the United States where he gave 80 concerts, and South America. He often played with the pianist Harold Bauer.

On 15 January 1904 Casals was invited to play at the White House for President Theodore Roosevelt {{fact|date={{subst:CURRENTMONTHNAME}} {{subst:CURRENTYEAR}}}}. He played in the Carnegie Hall in New York, playing Richard Strauss's Don Quixote with the composer conducting. Between 1906 and 1912 he had a relationship with a Portuguese cellist Guilhermina Suggia, although they were never married. In 1914 Casals married the American singer Susan Metcalfe. They were separated in 1928, but did not divorce until 1957.

Casals formed a trio with the pianist Alfred Cortot and the violinist Jacques Thibaud. They gave many concerts and made some of the first recordings of piano trio music. They played together for 30 years.

In 1905 he toured Russia. It was an unfortunate time because the Russian Revolution was taking place. During the concert he played in Moscow gunfire could be heard outside the hall.

During the First World War Casals lived in New York. In 1919 he went back to Barcelona. He wanted to improve the music in his own country. There were very few people who could play well, so he founded his own orchestra: the Orquesta Pau Casals. This annual music festival continued until the start of the Spanish Civil War in 1936.

Casals supported the Spanish Republican government. When it was defeated he said that he would not return until Spain was once more a democratic country. He then left his country and went into exile. He went to live in the French village of Prades which was near the border with Spain. He continued his career as a cellist. After World War II, in June 1946, he went to England and played the cello concertos by Schumann and Elgar at the Royal Albert Hall with Sir Adrian Boult conducting. Outside the hall the police had to help him get to his car because so many people were crowding round him.

Casals played in many countries, but refused to play in any country that was friendly with Franco’s government in Spain {{fact|date={{subst:CURRENTMONTHNAME}} {{subst:CURRENTYEAR}}}}. In 1945 he gave a broadcast at the BBC and spoke to his people in Catalonia {{link}}. He finished by playing a Catalan folksong called El Cant dels Ocells (The Song of the Birds). He played it at the end of all his concerts. When Britain recognized Franco’s government, Casals decided he could no long play in England. He made one big exception to his decision not to visit Franco-friendly countries: in 1961 he took part in a concert of chamber music in the White House on 13 November where he played to President John F Kennedy whom he admired.

In 1950 he continued his career as conductor and cellist at the Prades Festival in Conflent. He agreed to play on condition that the money that was made at the festival would be given to a refugee hospital nearby. Franco said that Spaniards were forbidden to go to the festival, but many managed to cross the border on foot. Many world-famous musicians played at Prades: Josef Szigeti, Isaac Stern, Rudolf Serkin and Eugene Istomin and others.

He continued to lead the Prades Festivals until 1966.

When he was 80 Casals married one of his young students, a girl called Marta. They had met in Prades. Marta was from Puerto Rico where Casals’ mother had come from. They went to live in Puerto Rico in a house called "El Pesebre". In 1957 a musical festival was started there in the town of San Juan. He continued to visit the festival at Prades every year until 1966. He also gave masterclasses at American schools and universities as well as in other countries. Some of these were televised.

Casals was also a composer. One of his last compositions was the Himne a les Nacions Unides (Hymn of the United Nations); he conducted its first performance in a special concert at the United Nations on 24 October 1971, 2 months before his 95th birthday.

Casals died in 1973 in San Juan, Puerto Rico, at the age of 96. In 1979 his remains were taken to El Vendrell, Catalonia, where he had been born. He did not live to see the end of the Franco dictatorial regime. Later, when Franco had died in 1975 and Spain was a democracy once more, the Spanish government under King Juan Carlos I, issued a postage stamp in honour of the centenary of his birth.

In 1989, sixteen years after his death, Casals was awarded a Grammy Lifetime Achievement Award. 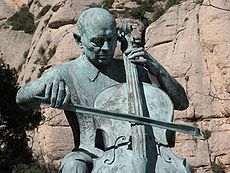 A centenary statue at Montserrat.

The International Pau Casals Cello Competition is held in Germany once every four years. It was started in 2000 to help young cellists to start their careers. It is supported by the Pau Casals Foundation, under the patronage Casals’ widow. One of the prizes is the use of a beautiful cello which was owned by Casals.