The higher elevations on the region are called the Guiana Highlands, which is where there are mesas or "table" mountains called tepuis.

Guiana and The Guianas are often used as collective names for Guyana, Suriname and French Guiana, and sometimes even includes the portions of Colombia, Venezuela and Brazil which are on the Guiana Shield. 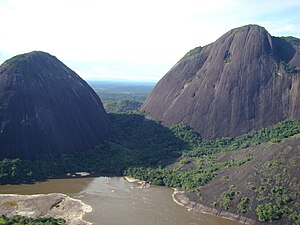 The Guiana Shield is In six countries; they are, from west to east:

The Guiana Highlands is formed by small plateaus and mountain ranges. The western part of the Highlands, mainly in Venezuela, is where are the higher mountains. From west to east, the mountains ranges and plateaus are:

Many rivers start on the Guiana Highlands and most of them flow to the north, into the Atlantic Ocean. Some of them are:

As a whole, the Guiana Shield region has a tropical climate characterized by a relatively high mean annual temperature over 25 °C (77 °F) at sea level. Because of the Guiana Shield is just north of the equator, its climate varies primarily according to elevation and the effects of the trade winds. The trade winds blow from the east and northeast, off of the Atlantic Ocean onto northeastern South America.[2]

The heaviest rains usually occur between May and August, whereas the rainy season from December to January is shorter and less intense, with rains mostly along the coast. In areas where there is only one rainy season, the driest part of the year is January to March; in areas where there are two rainy seasons the driest months are March and October. However, even during most dry seasons, frequent storms provide adequate moisture to allow evergreen tropical moist forests to persist in most low elevation parts of the region.[2] 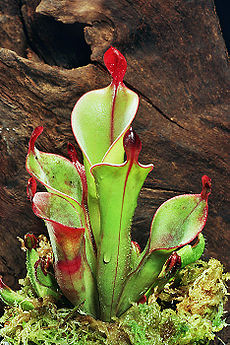 Since the individual peaks in the Guiana Highlands have been isolated from each other for millions of years, many plants and animals have evolved in a different way on each mountain.

Many of the mountains are covered in permanent clouds and mist washing all the soil away, and leaving barren rock and water. Because of this many plants are carnivorous and feed on insects and small animals.

So far over 2,000 species of plants been found, and more than 50% are endemic to this region, meaning they are found only here, and many are only found on one peak.[6]

Some minerals are found in large amounts in the Guiana Shield; diamonds, gold and bauxite are some of them. The large-scale mining of these, and other minerals, is creating some environmental problems.[7]

In the Guiana Shield, there are several protected areas, as National parks or reserves; some of them are: