Hurricane Alicia formed from Tropical Depression Three on August 15 in the Gulf of Mexico and slowly moved west towards Texas, where it made landfall on August 18 at its strongest point with 115 mph (185 km/h) winds. Alicia quickly weakened into a tropical depression before dissipating overland on August 21. 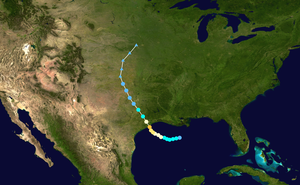 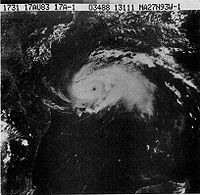 A mesoscale low formed off the Alabama and Mississippi coasts on August 14 with a weak frontal trough that had formed off of New England. Pressures were high in the Gulf of Mexico, but the low strengthened into Tropical Depression Three on August 15. A ship located within 60 miles of the depression reported a pressure of 1015.5 millibars and the storm was upgraded to Tropical Storm Alicia late on August 15. With the high Gulf pressures, Alicia was unable to gain size, so it stayed very small, but created faster winds, and became a Category 1 hurricane on August 16. Steering currents were weak during Alicia's lifetime over water. A new frontal ridge had formed on August 17 which caused the storm to slowly move in a westerly direction.[1] Alicia continued west until the frontal ridge had collapsed to the east.[2]

Alicia then began to take a more northern drection August 18 to Port Arthur, Texas. During that time, the hurricane began to gain strength at about 1 mbar an hour, peaking at 963 mbar with winds of 115 mph (185 km/h) on the morning of the 18th. Just before landfall, Alicia showed a rare "double eye" feature for a few hours.[3] The storm made landfall in Texas as a category 3 hurricane at about 1:45 a.m. CDT on Thursday, August 18.[1] Alicia weakened very quickly after landfall, losing tropical characteristics and began to speed up to the northwest, finally losing its identity in the southeast Nebraska on August 21.[1]

Several hurricane watches and warnings were given out that were related with Alicia. The first ones were a gale warning and a hurricane watch for the area of Corpus Christi, Texas to Grand Isle, Louisiana which was given out on August 16. On August 17, a hurricane warning was issued for Corpus Christi to Morgan City, Louisiana and later for Port Arthur, Texas.[4] Originally, however, residents did not take the warnings seriously. Galveston Mayor E. Gus Manuel, against the advice of Texas Governor Mark White, ordered the evacuation of only low-lying areas.[5]

30 percent of Galveston's population evacuated the island when Hurricane Allen threatened the eastern Texas coastline in 1980; only 10 percent of the population living behind the seawall chose to leave when Alicia made landfall.[6] Throughout the day, however, as increasing winds began to cause damage in Galveston, people grew more worried. The mayor finally ordered a widespread evacuation of the island after midnight on August 18, but by then the bridges to the mainland were no longer usable as they have been broken.[5]

The city of Galveston reported 7¾ inches of rain, Liberty reported 9½ inches, and Greens Bayou reported almost 10 inches of rain. Centerville reported over 8 inches with Normangee and Noxia reporting over 7 inches.[7] Maximum rainfall in the Houston area in Harris County was about 10-11 inches. 8 inches of rain was reported in Leon County and 9 inches in the Sabine River area. High gusts were also reported throughout Texas with a maximum gust of 125 mph reported on the Coast Guard cutter Buttonwood (WLB-306) stationed at the northeastern part of Galveston Island.[3] Pleasure Pier reported tides of 8.67 feet with Pier 21 reported a little over 5½ feet. Baytown, Texas reported 10–12 feet tides, and 12.1 feet at Morgan City, the highest recorded by Alicia.[7]

Twenty-three tornadoes were reported that were either related or caused by Alicia, fourteen of those were located in the Galveston and Hobby Airport area. The other nine were concentrated around Tyler to Houston, Texas, ranging around F2 on the Fujita scale.[8] An oil spill occurred around Texas City and an ocean-going tugboat capsized 50 miles of the Sabine Pass coast.[9] The Coast Guard Air Station Houston (AIRSTA) weathered Alicia with minimal damage, and afterwards AIRSTA's helicopters helped residents with evacuation, supply, and survey flights.[10]

The Galveston NWS office (temporarily) lost its radar.[11] Houston suffered billions of dollars in damage. Thousands of glass panes in downtown skyscrapers were shattered by gravel blown off of rooftops.[12] Houston Lighting and Power reported that about 750,000 homes were without electricity after Alicia hit. Many stores had to stay closed for days afterward due to risks of falling glass in the area.[13] In Galveston, the western beach had its public beach boundary shifted back about 150 feet.[14] An entire wall of the Flagship collapsed. About 5 feet of sand was scoured, leaving beachfront homes in a natural vegetation state. The beachfront homes after Alicia were in violation of the Texas Open Beaches Act and the Attorney General's office forebade the repair or rebuilding of those homes.[14] The Corps of Engineers stated that if the Galveston Sea Wall was not there, that another $100 million dollars in damage could have occurred.[14] Also, if Alicia was the size of Hurricane Carla from 1961, damage could have easily double or possibly tripled.[14] Alicia also did damage to chemical and petrochemical plants in Houston.[15]

Hurricane Carla in the 1961 Atlantic hurricane season hit a less populated area as where with Alicia hit a more populated area. Had Alicia been the size or strength of Carla, damage could have easily doubled or tripled.

Heavy amount of rainfalls were recorded with 8-14 centimeters in the southern-central part of Texas from a curved path. Rains reached up to 5 inches in the same area, however rainfall was limited to that area. Kansas only got 1-3 inches which were recorded in the eastern to central parts of the state. The southeast part of Nebraska received one inch of rain from Alicia's remnants. Michigan, Iowa, Minnesota, Louisiana and Wisconsin all received one inch of rainfall.[16]

Hurricane Alicia brought useful rains to the southern Great Plains, which had been suffering from a drought for much of the summer of 1983. In the end, Hurricane Alicia killed 21 people and caused $2 billion in damage ($5.27 billion in 2006 dollars).

There was heavy amount of rainfalls were recorded with

The Red Cross had to provide food and shelter to 63,000 people in the hurricane's wake, costing to about 166 million dollars.[8][14] FEMA gave out $32 million (1983 USD) to Alicia's victims and local governments. $23 million of that was to go picking up trash and wrecked objects spread after Alicia.[17] More than 16,000 people wanted help from FEMA's disaster service centers. The Small Business Administration, aided with 56 volunteers, interviewed over 16,000 victims, and was predicted that about 7000 loan applications would be requested. The Federal Insurance Agency had closed over 1318 flood insurance cases from Alicia's effects, however only 782 received final payment.[17]

On the September 23 hearing, witnesses agreed that the National Weather Service did well before and during the emergency caused by Alicia. N.W.S. forecaters also gave evidence in which they said they thanked themselves that their predictions were well "on target" and that the local emergency plans worked so well, which saved many lives. Mayor Gus Manuel on Galveston said that the NWS did an excellent job during Alicia. He was also very impressed about their landfall predictions on August 17, before Alicia made landfall.[17]

On the September 24 hearing, evidence was brought upon which demonstrated the need improving to the readiness to cope with disasters, such as Alicia. Mayor Manuel mentioned that his town needed stronger building codes, which were under review.[17]

The name Alicia was retired in the spring of 1984, becoming the 30th storm name to be retired and will never again be used for an Atlantic hurricane. It was replaced with Allison in the 1989 season. The name Allison was coincidentally retired after doing major damage to the same the area in 2001.