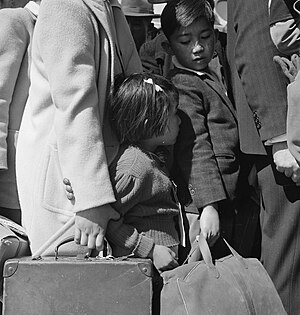 On December 7, 1941, Japan attacked Pearl Harbor in Hawaii and declared war on the United States. Many Americans were angry, and some blamed all Japanese people for what had happened at Pearl Harbor. They spread rumors that some Japanese people knew about the attack ahead of time and had helped the Japanese military. The FBI and other parts of the United States government knew that these rumors were false, but did not say anything.[2]

Japanese Americans began to feel that other Americans were becoming upset with them. For example, John Hughes, a man who read the news on the radio in Los Angeles, California, spent about a month saying negative things about Japanese Americans. There were reports of businesses that had anti-Japanese signs, such as a barber shop with a sign saying "Free shaves for Japs" and "not responsible for accidents" and a funeral home with a sign saying "I'd rather do business with a Jap than an American".[3]

In February 1942, President Franklin D. Roosevelt signed Executive Order 9066. This order said that people who lived in some parts of the country could be taken out of those areas for any reason. While the order did not use the exact words "Japanese Americans", people knew that those were the people who would be taken out of those areas. Most of these areas were in the western United States. This was where most Japanese Americans lived at that time. Many were in the state of California. However, in the state of Hawaii, a little over 1,000 of 160,000 Japanese were interned.[4] The large number of Japanese living there would have made it almost impossible.

In order to prevent Japanese Americans from leaving these areas on their own, the government stopped many of them from taking money out of their bank accounts. This made it harder for them to move. Japanese Americans were given only 48 hours to leave for internment camps in other states. They were only allowed to carry one bag with them, and could not bring radios or cameras.[5] 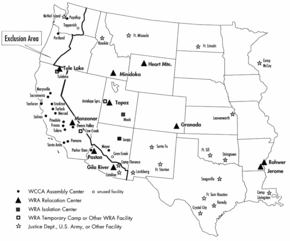 Map showing where the Japanese American internment camps were.

There were three government agencies that ran camps. Ninety percent of the Japanese were in camps run by the War Relocation Authority. WRA camps were all Japanese camps. Ten percent of Japanese were in mixed race camps either run my the Immigration and Naturalization Service or the Army. Many different people were interned in INS and Army camps such as German Americans, Italian Americans, German and Italian immigrants, some refugees, commercial seamen from Germany and Italy whose ships were taken by the U.S. Navy and passengers of those ships.

WRA camps were surrounded by barbed wire.[6] They were also guarded by soldiers who waited in watchtowers holding guns.[7] Some people were shot.[8] For example, James Wakasa, who stepped outside the barbed wire fence, was shot and killed. The guard who shot him said that Wakasa was trying to escape, but the Japanese Americans in the camp did not believe the guard.[9] Most of the camps were many miles inland from the coast, and often in rural areas. Many of the camps were in the desert,[10] which was uncomfortable for many of the Japanese Americans who were not used to that type of climate. This also meant that even if somebody escaped, there would be nowhere for them to go. In the camps, people had to stand in line to eat or to go to the bathroom.[11]

One famous camp was Manzanar, which was in California. Many Japanese from Los Angeles and San Francisco were sent there. Other camps included Poston in Arizona and Minidoka in Idaho. There were a few camps outside of the western U.S., such as Jerome in Arkansas. Japanese were often crowded into small spaces, such as race tracks, before being sent to the camps.[12]

The end of internment

This audio file was created from an article revision dated 2010-12-02, and does not play the most recent changes to the article. (Audio help)
More spoken articles