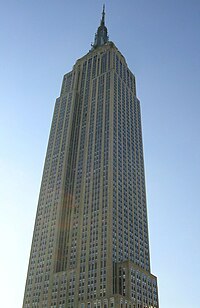 A skyscraper is a very tall building, usually more than 152 metres (500 feet) in height. A highrise is another name that people call skyscrapers. Skyscrapers are almost always found in cities. Many large cities have many skyscrapers such as; New York City, Chicago, London, Paris, Sydney, Beijing, Berlin, Toronto, Moscow, Hong Kong, Tokyo, and Singapore.

For example, New York City, a large city in the USA, has a famous skyscraper called the Empire State Building. In the last 20 years, people have been building skyscrapers in cities like London, England that did not have many tall buildings in the past. In Chicago, the first skyscraper was built. About 90 years later then-called Sears Tower was built claiming the world's tallest building until the late 1990s.

The current world tallest building is the Burj Khalifa.

At the start, the word skyscraper meant a tall sail on a sailing ship. The word's meaning has changed, and today it means a tall building. Until the nineteenth century, buildings taller than six stories tall were not common. Tall buildings made out of weak metals would fall down. People also did not like walking up many steps. Also, running water could only be brought up to fifty feet high.

The first skyscraper, The Home Insurance Building, was built in Chicago, Illinois, USA. William LeBaron Jenney designed it. The building, ten stories high, was built in 1884 and 1885. It was destroyed in 1931 because they wanted to build another building in its previous place.