The storm history of Hurricane Katrina started on August 23, 2005. Hurricane Katrina was a highly destructive Category 5 hurricane which formed as Tropical Depression Twelve near the Bahamas. The next day, the tropical depression strengthened to a tropical storm, and was named Katrina. Katrina continued on to make landfall on the southern part of the U.S. state of Florida as a Category 1 hurricane.

While passing across Florida, Katrina weakened to a tropical storm. However, the warm waters of the Gulf of Mexico allowed it to rapidly intensify to the sixth strongest Atlantic hurricane in recorded history. Afterwards, Katrina made landfall as a Category 3 hurricane near Buras-Triumph, Louisiana, and once more near the Mississippi/Louisiana border. Katrina did not stop going northward through the central United States and finally dissipated near the Great Lakes, where it was absorbed by a cold front.

Tropical Depression Twelve formed over the southeastern Bahamas at 5:00 p.m. EDT (2100 UTC) on August 23, 2005, some of the tropical depression was from the remains of Tropical Depression Ten, which had dissipated from the effects of a nearby upper tropospheric trough. While the normal standards for numbering tropical depressions in the Atlantic shows that the old name/number is kept when a depression dissipates and regenerates, satellite data indicated that a second tropical wave combined with Tropical Depression Ten north of Puerto Rico to form a new, much more advanced system, which was then named as Tropical Depression Twelve.[1] Simultaneously, the trough in the upper troposphere weakened, causing the wind shear in the area to decrease, also allowing the new tropical depression to develop. In a later re-analysis, it was found that the low-level circulation of TD Ten had completely detached and dissipated, with only the remnant mid-level circulation moving on and merging with the second tropical wave mentioned before. As a result, the criteria for keeping the same name and identity were not met.[2]

As the atmospheric conditions surrounding Tropical Depression Twelve were good for tropical development, the system began to strengthen, was upgraded to Tropical Storm status and given the name Katrina on the morning of August 24. A burst of convection allowed Katrina to become the fifth hurricane of the 2005 season on August 25, only two hours before it made landfall around 6:30 p.m. EST (2230 UTC) between Hallandale Beach and Aventura, Florida.

Hurricane Katrina prior to Florida landfall.

Katrina struck the peninsula at a high speed with 80 mph (130 km/h) winds, and had a well-defined eye on Doppler radar, which managed to stay undisturbed throughout its passage over Florida. The storm weakened over land on August 26 to a tropical storm, but regained its strength as a hurricane at 2:00 a.m. EDT (0600 UTC), about one hour after making landfall in Florida. Parts of the Florida Keys experienced tropical storm force winds throughout August 26, with the Dry Tortugas briefly experiencing hurricane-force winds.[2]

At first, the National Hurricane Center forecasts predicted that Katrina would begin turning northward after landfall, eventually to make its second landfall on the Florida Panhandle about three to four days later.[3] Katrina, however, continued a westerly and west-southwesterly track, which eventually made the forecasts change their predictions, and forecast Katrina to move westward into New Orleans.[4]

Right after the storm entered the Gulf of Mexico, the low wind shear, good upper-level outflow, and the warm sea surface temperatures of the Gulf Loop Current caused Katrina to intensify rapidly. On August 27, the storm was upgraded to Category 3 strength,[5] becoming the third major hurricane of the season. An eyewall replacement cycle inhibited strengthening of its maximum winds for about 18 hours, but nearly doubled the size of the storm as a result.[2] The storm then began a second period of rapid intensification starting at 7:00 p.m. CDT on August 27, and by 12:40 a.m. CDT on August 28, Katrina was upgraded to a Category 4 hurricane with maximum sustained winds of 145 mph (233 km/h).[6] It became a Category 5 storm by 7:00 a.m. CDT,[7] twelve hours after the beginning of the second round of rapid intensification, and reached its peak intensity at 1:00 p.m. CDT with maximum sustained winds of 175 mph (280 km/h), gusts of 215 mph (344 km/h) and a central pressure of 902 mbar (26.64 inHg).[8] The minimum pressure made Katrina, at the time, the fourth most intense Atlantic hurricane on record (Hurricanes Rita and Wilma would later beat Katrina's record that same year).[2] As the hurricane came closer New Orleans, the Weather Forecast Office in Slidell, Louisiana gave out two strongly-worded warnings of the storm's danger.

By the afternoon of August 28, the storm was large enough that some areas of the Gulf Coast were already experiencing tropical storm-force winds. The center of Katrina was about 180 statute miles (290 km) from the mouth of the Mississippi River, but tropical storm-force winds extended 230 mi (370 km) from the center of the storm, and hurricane-force winds extended about 105 miles (170 km) away.[9]

Overnight on August 29, and into the morning of the next day, Katrina quickly weakened (in terms of maximum sustained winds) as it began to enter another eyewall replacement cycle. The inner eyewall disappered before an outer eyewall had fully formed, which was one of the reasons of its rapid weakening. In 18 hours, the hurricane's maximum sustained winds decreased from 170 mph (280 km/h) to 125 mph (205 km/h).[2] However, storm surges remained high at landfall because large waves greater than 30 feet (9.1 m) in height were generated beforehand (with a buoy recording a 55 ft/16.7 m wave at sea), when Katrina was at Categories 4 and 5 on the Saffir-Simpson Hurricane Scale. The waves then combined with the storm surge of the large Category 3 hurricane.[2] 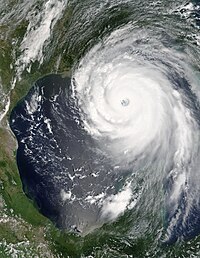 Katrina made its second landfall at 6:10 a.m. CDT on August 29 as a Category 3 hurricane with winds of 125 mph (205 km/h) near Buras-Triumph, Louisiana. Because Katrina had just weakened from Category 4 strength, and also because of the shape of the coastline, Category 4-force winds are believed to have existed on land while the eye was over water. At landfall, hurricane-force winds were recorded 120 miles (190 km) from the center, the storm's central pressure was 920 mbar (27.17 inHg), and its forward speed was 15 mph (10 km/h). As it made its way up the eastern Louisiana coastline, most communities in Plaquemines, St. Bernard Parish, and Slidell in St. Tammany Parish were severely damaged by storm surge and the strong winds of the eyewall, which also swipped over eastern New Orleans, creating $1 billion worth of damage to the city from intense flooding and wind damage.

Original estimates recorded that Katrina had made this landfall as a Category 4 hurricane, with 135 mph (220 km/h) winds;[10] however, as mentioned above, the storm weakened just before landfall to Category 3 intensity. The reasons for this weakening are not completely understood yet; while the eye-wall replacement cycle played a part, slightly increasing shear, dropping sea surface temperatures, dry air on the western semicircle of the storm and interaction with the continental landmass also may have played a role in weakening the cyclone.[2] This follows the trend of previous strong cyclones in the Gulf of Mexico: all cyclones with minimum central pressures of 973 mbar (28.73 inHg) or less have weakened over the 12 hours before making landfall in the Gulf Coast of the United States.[2]

A few hours later, after weakening slightly, Katrina made its third landfall near the Louisiana-Mississippi border with 120 mph (195 km/h) sustained winds and 928 mbar (27.37 inHg) pressure, still at Category 3 intensity. Its minimum pressure at its second landfall was 920 mbar (27.17 inHg), making Katrina the third strongest hurricane on record to make landfall on the United States, behind Hurricane Camille's 909 mbar (26.85 inHg) reading in 1969, and the 1935 Labor Day Hurricane's 892 mbar (26.35 inHg) record.[2]

Because the storm was so large, its highly destructive eye-wall winds and the strong northeastern quadrant of the storm pushed record storm surges onshore, smashing all of the Mississippi Gulf Coast, including towns in Mississippi such as Waveland, Bay St. Louis, Pass Christian, Long Beach, Gulfport, Biloxi, Ocean Springs, Gautier and Pascagoula, and, in Alabama, Bayou La Batre. The surges at its peak were at 28 feet (8.5 m) in Bay St. Louis, Mississippi, and at 13 feet (4.0 m) as far away as Mobile, Alabama, which saw its highest storm surge since 1917.[2] Storm surge was particularly high due to the hydrology of the region, the hurricane's extreme size, and the fact that it weakened only shortly before landfall. As Katrina moved inland diagonally over Mississippi, high winds cut a swath of damage that affected almost the entire state.[2]

Hurricane Katrina after its third landfall, but still at hurricane strength, over southern Mississippi.

Katrina stayed at hurricane strength in Mississippi, but it soon weakened. It lost hurricane strength more than 150 miles (240 km) inland, near Meridian, Mississippi. Katrina was then lowered into a tropical depression near Clarksville, Tennessee and broke in half.[11] One half of the storm continued to race northward, affecting the Central United States, and it was last noticeable in the eastern Great Lakes region. On August 31, it was absorbed by a frontal boundary and became a powerful extratropical low, causing 1.97–6.69 inches (50–170 mm) of rain in 12 hours. It also caused gale-force wind gusts from 31 to 61 mph (50 to 98 km/h) in southeastern Quebec and northern New Brunswick. In the region of Saguenay and Côte-Nord, rain caused breakdowns and failure in roads. The Côte-Nord region was isolated from the rest of Quebec for at least 1 week. However, the other half of Katrina broke off in the eastern part of the Appalachians, which caused a major tornado outbreak in the area from central Georgia to central Pennsylvania. The tornadoes were strong, killing two people and creating heavy damage.[2]

At 11:00 p.m. EDT on August 31, the center of the remaining storm that was once Katrina was absorbed by another weather system in southeastern Canada.[12][13]