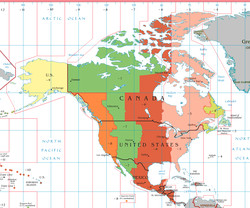 The zone is one hour ahead of the Pacific Time Zone and one hour behind the Central Time Zone.

Places that are in Mountain Time Zone

In Canada, this time zone includes all of Alberta, the Northwest Territories (except for Tungsten), the Kitikmeot Region of Nunavut, part of southeastern and northeastern British Columbia, and the area of Saskatchewan around the city of Lloydminster.

Daylight saving time occurs from early April to late October. During daylight saving, Central Time Zone is only 6 hours behind Coordinated Universal Time (UTC−6). Most of the locations in Mountain Time Zone observe daylight saving time. A few places do not. These include Sonora and all of Arizona that is not in the Navajo Nation. These places stay on standard time all year.