The Lightning Thief is a 2005 fantasy-adventure novel based on Greek mythology. It was the first young-adult book written by author Rick Riordan. It is the first book in the Percy Jackson & the Olympians series. The series is about the adventures of modern 12-year-old Percy Jackson after he discovers he is a demigod (half-human, half-god). Percy is the son of a mortal woman and the Greek god Poseidon. Percy and his friends go on a quest (adventure) so that a war between the Greek gods Zeus, Poseidon and Hades will not happen.

Riordan finished writing his manuscript in 1994. The Lightning Thief was first bought by Bantam Books in 1997. Bantam sold it to Miramax Books. Miramax published it on June 28, 2005. The book sold more than 1.2 million copies in the next four years. The book won many awards. In 2007, it was on The New York Times Best Seller list for children's books. It was one of the Young Adult Library Services Association's Best Books for Young Adults. It was made into a movie named Percy Jackson & the Olympians: The Lightning Thief. The movie was first shown in the United States on February 12, 2010.[3] The sequel to this book is The Sea of Monsters. 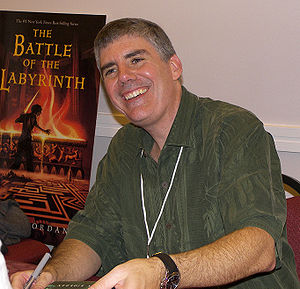 Rick Riordan, the author, at the release of The Battle of the Labyrinth

Planning for both The Lightning Thief and the series began when Riordan started making up stories for his nine-year-old son, Haley.[4] He had started studying Greek mythology (stories) in second grade. He wanted his father to tell him stories about them before he went to sleep. Riordan had taught Greek myths as a middle school teacher.[5] He remembered some of the myths, which he then told to his son. Soon, Riordan had told him all the stories. When Haley wanted him to make up new stories using the characters from the myths, Riordan created the character of Percy Jackson. Like Percy, Haley had ADHD and dyslexia. He made up the story of how Percy traveled across the United States to search for Zeus' master bolt. After hearing the story, Haley wanted his father to write a book about Percy and his friends.[6]

In June 1994, Riordan finished the story. He started looking for agents to publish it. He went to many local colleges to find an editor before finding an agent.[7] He gave his manuscript to his agent and editor to review. At the same time, he gave the book to some sixth, seventh and eighth graders to read and tell him what was good or bad about it. They named the book and helped Riordan describe how Percy's sword (Riptide) worked.[8] In June 1997, Riordan signed with Bantam Books to prepare the book for publishing.[7] In 2004, Miramax Books bought the book. The money was enough for Riordan to quit his teaching job and spend his time on writing.[9] The book was published on June 28, 2005. It sold over 1.2 million copies. The book had hardcover, softcover and audio editions.[10][11] It has been translated into many languages. It has been published all over the world.[12]

The Lightning Thief is a fantasy–adventure novel which uses the ideas of ancient Greek mythology[13] in today's world.[14] It is written in a fast-paced,[15][13] humorous (funny) style.[14]

Percy Jackson is a 12 year old boy. He has ADHD and dyslexia. He has been thrown out of many schools. On a trip with his mother, he meets his friend Grover, a satyr (half-goat, half-human). Grover tells Percy's mother that Percy must go to a camp. When they drive towards the camp, a Minotaur (monster) attacks them and grabs Percy's mother. She dissolves into gold sparkles of light, but Grover and Percy escape.

Percy later wakes up. He learns that he is in Camp Half-Blood, which is a secret training camp for demigods. Percy has to live in the Hermes cabin because he does not know which god his father is. He is under the care of Luke Castellan, the cabin counselor (leader). During a game, the children of the war god Ares attack Percy. He is healed when he steps into a river. When Poseidon's trident appears above his head, Percy learns that he is Poseidon's son. After World War II, Poseidon, Hades and Zeus made an oath (promise) not to have any more children because they were too powerful. However, Poseidon broke the oath by having Percy.

Chiron tells Percy to find Zeus' master lightning bolt. Chiron thinks Hades stole the bolt. However, Zeus discovers that Poseidon has broken his oath, and thinks Poseidon told Percy to steal the bolt. He tells Percy that he has ten days until the summer solstice to find it. Before leaving, Luke gives Percy magic shoes. Percy gives them to Grover. Annabeth (a daughter of Athena) and Grover join Percy in his quest to find the bolt.

They decide to travel west to reach the entrance to the Underworld, which is in Los Angeles. They meet many Greek monsters. They also meet Ares. Ares tells Percy that his mother is alive. When they come near the pit of Tartarus, Luke’s shoes try to pull Grover into it, but he escapes. Percy meets Hades, who also thinks Percy stole the Master Bolt. He also thinks Percy stole his Helm of Darkness. Percy knows that Ares has tricked him when he finds the bolt in his backpack. He runs away from the Underworld. He has to leave his mother there. Percy fights and defeats Ares by hurting the god's heel. Ares gives Percy the Helm of Darkness. Percy gives it back to Hades. Olympus is now present at the top of the Empire State Building in New York City. Percy arrives there to give the master bolt to Zeus.

Percy goes back to camp after hearing that his mother is alive. He meets Luke, who says that he stole the bolt for Kronos. He calls a poisonous scorpion which stings and nearly kills Percy. Percy kills the scorpion first. Chiron cures Percy, who leaves camp. He goes to a new school and stays with his mother instead of staying at camp.

The Lightning Thief received mostly positive reviews. Common Sense Media said "there are two levels of fun in The Lightning Thief. One is the fast-paced quest of a young hero and his friends to save the world" and added "another level of fun here – laughing at the wicked ways the author has updated the gods and monsters for the 21st century".[14] However, it criticized some parts of the book. They described the prose as "choppy and attitude-filled" and complained that "[t]he characters aren't emotionally involving". Its overall rating was 4 stars out of 5.[14] The New York Times praised The Lightning Thief as "perfectly paced, with electrifying moments chasing each other like heartbeats".[16] School Library Journal said in its starred review (which is given to outstanding books) that the book was "An adventure-quest with a hip edge" and that "Readers will be eager to follow the young protagonist's next move".[17] Kirkus praised the book and said, "Packed with humorous (funny) allusions to Greek mythology and clever updates of the old stories, along with rip-snorting [intense] action sequences, the book really shines in the depiction of Percy – wry, impatient, academically hopeless, with a cut-to-the-chase bluntness one would wish for in a hero of old." Eoin Colfer, author of Artemis Fowl, called it "A fantastic blend (mix) of mythology and modern".[18] Publishers Weekly also praised the book, regarding it as "swift and humorous" and added that the book would "leave many readers eager for the next installment."[19] On April 8, 2007, The Lightning Thief was ranked ninth on The New York Times Best Seller list for children's books.[20] When speaking about the various awards, Rick Riordan said:

"The ultimate compliment for a children's writer is when the kids like it."[21]

On June 28, 2005, a 10 hour 25 minute audio book version of The Lightning Thief, read by actor Jesse Bernstein, was published worldwide by Listening Library.[11][33]

Kirkus said in their review, "the narrator’s voice lends a refreshing air of realism to this riotously paced [fast paced] quest tale of heroism that questions the realities of our world, family, friendship and loyalty". AudioFile Magazine praised the audiobook, saying both adults and children will be "spellbound" when they listen to "this deeply imaginative tale unfold."[33] School Library Journal both praised and criticized the audio book saying "Although some of Jesse Bernstein's accents fail (the monster from Georgia, for instance, has no Southern trace in her voice), he does a fine job of keeping the main character's tones and accents distinguishable".[34]

The Lightning Thief is followed by The Sea of Monsters. There, Percy and Annabeth rescue Grover, who has been taken prisoner by Polyphemus, the Cyclops. They get the Golden Fleece from Polyphemus' island to save the camp. They are joined by Percy's half brother, Tyson, and Clarisse in this mission.