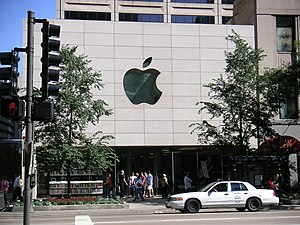 Apple Inc. is a multinational company that makes personal computers (the Macintoshes), software (macOS, iOS, watchOS and tvOS), and mobile devices (iPod, iPhone and iPad) like music players. Apple calls its computers Macintoshes or Macs, and it calls its laptops MacBooks. Their line of mobile music players is called iPod, their smartphone line is called iPhone and their tablet line is called iPad. Apple sells their products all around the world.[5] Apple Inc. used to be called Apple Computer, Inc., but Apple changed their name after introducing the original iPhone.[6]

Apple Inc. is a public company and trades on the NASDAQ under the stock ticker AAPL. On March 19, 2015, it became one of the 30 components of the Dow Jones Industrial Average.

Apple was started in 1976 by Steve Jobs and Steve Wozniak.[7] Before they made the company, they sold "blue boxes", which had telephone buttons on them. People could use them to make telephone calls from payphones without paying any money. It did this by pretending to be a telephone operator. The company's first product is now called the Apple I computer. They were almost ready to sell it, but a problem happened. Steve Wozniak was working for the computer company Hewlett-Packard, and the papers that said he could work there said he had to give everything he invented to the company before he could do what he wanted to do with it. He showed the first Apple I to the boss at Hewlett-Packard, but they did not want his computer. Wozniak was then free to do what he wanted to do with the Apple I. It began selling in 1976. In 1977, they made their second computer, called the Apple II, which later became very successful compared to Apple I. 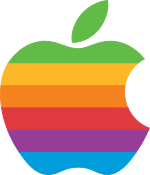 Before the iPhone, the most popular product made by Apple was the iPod. It was first sold in 2001, and Apple sold over 100 million in six years.[8] iPods are used to play music. Recent iPod Touches have a LED screens, can take and show pictures, record, view and edit videos, record word and voice memos, can connect to the Internet for features such as e-mail, and downloading apps from the App Store. The latest iPod Touch is made with a 64-bit architecture.

There are several different types of iPods:

The red iPod shuffle, iPod nano, and iPod touch models, and a few more products, are part of the "(PRODUCT) RED" program. This means that some of the profits from these iPods goes to the Global Fund to fight AIDS in Africa.[12]

Apple makes computers. Newer computers by Apple run the OS X operating system, which is included with the Mac.

Apple also makes software for their computers. Some of the software that Apple makes is:

Most computer users in the world use Microsoft Windows, the rival to Mac OS X. About 10% of computer users use Apple's Macintosh computers. It is not legal to run Apple's Mac OS X on a Windows computer. However, it is allowed to run Windows on modern Macintosh computers. Even though Apple makes their computers to run Mac OS X, they also make software that allows you to install Windows. This software is called Boot Camp.

Apple is perhaps most famous for its mobile devices, which are small computers that are easy to carry around. They have touchscreens with multi-touch technology instead of a separate keyboard and mouse. Most of these products run an operating system called iOS. It is very similar to the Android software made by Google. iOS can do a lot of different things, and it does so by running "apps", which are programs similar to those on a PC. Users can download and buy more apps for their device from Apple's App Store.

The iPhone is a mobile phone that can be used to make calls, send text messages, play games and music, show photos and videos (like an iPod), browse the Internet, and do much more. It was one of the first smartphones in the world when the first version was announced in 2007.[25] Apple makes and sells a different model every year, with new models being faster and more powerful and having a newer version of iOS than those that come before them. The newest iPhones released are the iPhone 12 and the iPhone 12 Pro which run on iOS 14. Many cellular carriers around the world sell iPhones, including Sprint, Verizon, AT&T, and T-Mobile in the US.

The iPad is a tablet computer, similar to the iPhone and iPod Touch but with a much larger display - while a typical iPhone has a screen about 4 to 5 inches in size, iPads have screens from 8 to 12 inches big. The first iPad was introduced in 2010 and along with the iPhone, new and better models are made and sold every year. A new iPad will ship with the latest iPad OS software if it is supported.

The Apple Watch is an example of "wearable technology", because it is worn around the wrist in the same way as a traditional wristwatch. However, it is much more than a wristwatch. It not only tells the time and date but also tracks the fitness of the person wearing it and monitors the person's health. It can also do many of the same things that an iPhone can do, such as use Apple's Siri personal assistant, but it needs to be "paired" with an iPhone for it to do these things, meaning that it will not work if you do not have an iPhone. The Apple Watch has many different designs: there is the standard version, a "Sport" version designed for athletes, and an "Edition" version which is made as a fashion product. These all run "watchOS", a modified version of iOS.

The Apple TV is a box that plugs into a TV. It can connect wirelessly to any computer that has the Apple program iTunes on it. The Apple TV can play music and show photos or videos from iTunes on the TV. Like other Apple products, Apple TV is regularly updated with new software and features. The most recent version comes with a new remote control and includes the Siri voice assistant. It uses tvOS, a TV version of iOS.

Following several campaigns (for example, Green my Apple[26]), Apple has made their products better for the environment. Previously, the notebook line removed many toxins and improved the products battery life and recharge cycles. Apple products used to ship with chargers and EarPods, but recently Apple has removed the chargers and EarPods from the boxes of most of their products to make the cases smaller. Apple saps they did this to make it easier to make and save resources and energy.

Since the formation of the Apple Computer Company in 1977, Apple has employed over 95,000 people worldwide. The majority of Apple's employees have been in the United States but Apple has substantial manufacturing, sales, marketing, and support organizations worldwide, with some engineering operations in Paris and Tokyo.

Apple employees include employees of companies Apple owns, and less important, but still relevant companies such as FileMaker Inc. and Braeburn Capital.

Apple Corps has sued Apple Inc. many times for trademark infringement. In the first case, Apple Inc. agreed not to go into the music industry. Apple Corps believes this agreement was broken when Apple Inc. launched the iTunes Store, Apple's online music store.

The two companies had trouble in the past, over the use of the Apple name. They made a deal that Apple Computers would not act as a music company. When Apple Computer Inc. began to sell their iPod, and set up their iTunes music store, Apple Corps believed they had broken their agreement, and took them to court. Apple Computers won the case, but the two companies later worked out a new deal. This deal now means that the Beatles music is now on the iTunes store, whereas it was not there before. Apple Computers was then renamed as Apple Inc. because of its mobile technology business. Steve Jobs, then CEO of Apple, Inc., has said in the past that he loves music from The Beatles, which can be considered to be very ironic.[32]