listen); East Franconian: Bambärch, archaic: Babenberg) is a town in the region of Upper Franconia, Bavaria, and the seat of the district administration Bamberg.

The town has about 70,000 inhabitants. Bamberg is an university city and administrative city. Its Lord Mayor is Andreas Starke (SPD). Beside being a modern regional centre, the city also has a cultural and historical side.

Bamberg is a famous town because it has many buildings which are very old. The basic structure of the town remained untouched through the centuries. Unlike most other German towns (such as Nürnberg), it was little damaged in World War II. Only 4.6% was totally ruined. The town centre is protected as a UNESCO World Heritage Site.

Bamberg is like Rome because it is built on seven hills, each one with a church at the top. The cathedral (Dom) is on the main hill. For hundreds of years the prince-bishops of the cathedral ruled over the land. This continued until the beginning of the 19th century after which they just continued in their religious function as archbishops.

The town centre below is built by the banks of the river Regnitz which splits into two parts. The left arm of the river is where the old town centre lies. The right arm is the Main-Danube Canal (Main-Donau-Kanal), which allows big ships to travel from the river Main to the Danube.

The houses known as "Little Venice" by the riverside

Many tourists visit the beautiful city of Bamberg. A good place to start is by the statue of Neptune in the pedestrian precinct. The Bambergers call this statue Gabelmann because Neptune is holding his three-pronged fork (“Gabel”).

The area here is called the Grüner Markt (Green Market). This place became centre of the bourgeois settlement which developed around it. Very close by is a big square called Maximiliansplatz. It is very lively here on market days. People eat the traditional sausages which are cooked at the sausage stall, and drink Bamberg beer. There used to be a church at the north-west end, but it was destroyed in 1806 at the time when the archbishops lost their political power. The patronage of St. Martin was taken over by the former Jesuit church which was built by the architect Georg Dientzenhofer until 1693, situated at the Green Market.

The names of nearby streets tell a lot about the town history. There is the Fischstrasse (Fish Street) where fishermen used to live. This leads down to the left arm of the river Regnitz where one can see the place where the boats used to stop to load and unload their goods. There is an old slaughterhouse. The Old Canal (Alter Kanal) runs along the east side of town, making a large island on which there are some very old buildings. The oldest buildings, dating from the 16th century, were built by tanners who became quite rich through their trade of making leather.

Bamberg’s Old Town Hall was built in the middle of the river Regnitz. It is not on the island, but it is was built by the people who drove huge beams of wood into the riverbed. Their town hall therefore stood between the south-west bank where the bishops ruled and the north-east bank where the ordinary tradespeople lived.

The Old Town Hall is the most-often photographed building of Bamberg. There are two bridges here for pedestrians: the Upper and Lower Bridge. The ancient Lower Bridge passes through the archway of the town hall. On one side there are beautiful Baroque paintings. On the other side one can still see the medieval black-and-white walls. This side was also plastered over with paintings in the Baroque times, but when a bridge nearby was blown up in World War II the plaster fell off, so it is now kept with the original medieval walls showing. Up a steep climb on a cobbled street is the Cathedral Square (Domplatz). All the buildings around the square are made from the local sandstone, although they date from different periods. Bamberg Cathedral (called Kaiserdom i.e. Emperor Cathedral) shows Romanesque and Gothic architecture.

Everyone should have seen the world-famed Rider or Bamberg horseman inside and many other medieval sandstone figures as well. The Ratsstube is built in the Renaissance style. The Alte Hofhaltung is medieval. It is a 15th century courtyard with a long row of two-storey buildings with a wooden gallery. Across the street from there is the New Residence (Neue Residenz) which is a Baroque palace. A walk through here leads into the famous Rose Garden (Rosengarten). From here one can see Abbey Church of St Michael at the very top of the hill. Just below, going back towards the river, is the Sandstrasse famous for its pubs and night life. 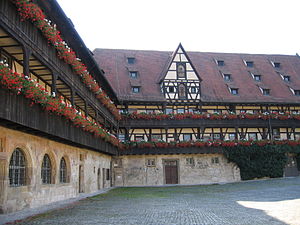 Bamberg is home to the world-famous Bamberger Symphoniker who perform in a new concert hall a short distance from the town centre. There are also many other music groups, including the Musica Canterey Bamberg who perform old music in some of the historical buildings.

The 19th century German writer E.T.A.Hoffmann lived in Bamberg. There is a new theatre in the town centre which is named after him.

There is also an important library, the Bamberg State Library.

Bamberg has a railway station from where one can travel to other large towns such as Würzburg, Munich, Nuremberg, Leipzig, Berlin and Hamburg as well as to other towns in eastern Upper Franconia such as Forchheim, Lichtenfels, Coburg, and Kronach.

Bamberg is served by Bamberg-Breitenau Airfield. At "Flugplatz Bamberg-Breitenau" are operating mostly public aircraft, although it is classificated as a military airport (IATA-Code: ZCD, ICAO-Code: ETEJ).
It is also possible to charter public flights to and from this airport.
Most international tourists who travel by plane arrive at Frankfurt International Airport or Munich Airport. The nearest bigger airport is Nuremberg Airport which can be reached within half an hour by car or one hour by train.

Bamberg has a problem with road traffic because, although there is a bypass, it cannot go all the way round the town because of the hills. Traffic is not allowed in many streets in the town centre. There is no parking allowed in the beautiful Domplatz except on Sundays.

Because Bamberg is on a river, transport by boat has always been important. The Rhine-Main-Danube Canal begins near Bamberg. It was completed in 1992 and makes it possible for boats to travel from the North Sea to the Black Sea.

In the town itself many people travel by bus. There is also a Park-and-Ride system.

There is a University in Bamberg. About 9000 students study there. The university is spread over lots of buildings in the town centre. It is a good way to make use of many of the large, historical buildings.

There are good schools in Bamberg including 8 Gymnasien. Pupils often choose which one to go to according to the subjects they are good at, because each school is strong in a particular area: science, music, language etc.

The areas of the town

Bamberg is famous for its beer. There are ten breweries in the town, of which the most famous is Schlenkerla which makes smoked beer (Rauchbier).

The ten breweries are: