Daniela Hantuchová (born April 23, 1983) is a Slovak professional tennis player. As of October 2011, she is ranked as World No. 25 in women's singles tennis and 29th in doubles.[2] In the past, she has ranked as both women's singles and doubles World No. 5. She reached the semi-final of the 2008 Australian Open. She played tennis for Slovakia in an international competition called the Fed Cup, and also in the Olympic Games.

As of October 2011, she has won over $7.9 million from playing tennis. She is currently working with some coaches who work for the Sanchez-Casal Academy, usually Angel Gimenez and Eduardo Nicolas. Her Women's Tennis Association Tour mentor was Martina Navratilova. Navratilova was her doubles partner for a while in early 2005. Outside tennis, she has modelled clothes and has been in some television advertisements.

Hantuchová's parents are both scientists. Her father, Igor Hantucha, is a professor who teaches computer science. Her mother, Mariane Hantuchová, is a toxicologist. Daniela was taught to play tennis by her grandmother, Helena, when she was six years old. Helena used to be a Slovakian national champion. Even though Daniela practiced a lot at tennis, she studied hard at school as well.[3]

Hantuchová's parents were divorced in 2003.[4] At the same time Hantuchová lost weight, and people became worried she was ill with anorexia. She said "I have proved that physically I don't have any problems."[3]

Hantuchová speaks three languages (German, Slovak, and English),[5] and can play the piano. She has several hobbies, such as skiing and ice skating. She has been in several advertisements on television, such as the campaign for Sony with Ana Ivanović in July 2006.[2] Hantuchová has also been in Italian Vogue magazine, as a model.[2] She now lives in Monte Carlo, Monaco.[6]

Hantuchová holds her racket in her right hand but uses both hands when playing backhand shots.[6] She can hit the ball hard with both her forehand and backhand. She has a strong serve and can play well when close to the net. She is famous for her long legs which are 110 centimetres (43 in) long.[3] Because she is so tall (1.81 m (5 ft 11+1⁄2 in)), she can run a long way in a short amount of time, which also helps in returning shots.[7]

Hantuchová became a professional tennis player in 1999, when she was 15 years old. She started training in Florida, but still went back to Bratislava, Slovakia, to study.[3] She won her first WTA tournament in 2000, a doubles title which she won in Bratislava.[2] In 2001, she played her first Grand Slam tournament at the Australian Open.[6] Hantuchová lost in her first match in Australia to Russian player Anna Kournikova.[8] However, she won the mixed doubles tournament, playing with Czech player Leos Friedl.[9] Hantuchová won her second WTA doubles competition by winning with Russian player Elena Bovina in Luxembourg.[2] She finished the year in the top 100,[2] and was given an award by the Women's Tennis Association (WTA) for being the best new player in 2001.[10]

In 2002, Hantuchová lost in the quarter-final of both the Wimbledon Championships and the US Open. However, playing with Zimbabwean Kevin Ullyett, she won the mixed doubles at the Australian Open.[11] She also came second in the doubles in Australia, playing with Spanish player Arantxa Sanchez Vicario. She and Ullyett lost the mixed doubles final at Wimbledon in the same season. She did win her first singles WTA tournament, beating Swiss player Martina Hingis at the Masters tournament at Indian Wells in California.[12] She also won two more WTA doubles tournaments, in Florida and Connecticut in the United States. Both times she won with Arantxa Sanchez Vicario.[2] Hantuchová finished the season in the top 10,[6] and was given an award for being the most improved player in 2002 by the WTA.[10] In January 2003, Hantuchová was the fifth best female tennis player in the world. As of June 2008, this is the best she has done.[13] Later in 2003, she split up from her English coach, Nigel Sears.[14]

Sears coached Hantuchová again in 2004 and in 2005, where she won the mixed doubles at the French Open and the US Open.[15][16] This means she had won all four Grand Slam mixed doubles tournaments. In June 2005, she and Japanese player Ai Sugiyama won a WTA tour doubles tournament in Birmingham, England. The same pair came second in the doubles final at the French Open. Hantuchová won her sixth WTA doubles title with Russian player Anastasia Myskina in Germany in October 2005.[2]

Hantuchová and Sugiyama won another doubles tournament in March 2006, this time in Doha in Qatar. Hantuchová finally split up with her coach, Sears, for good in April 2006.[13] She went on to win her eigthth WTA doubles tournament in May 2006 in Rome in Italy, again with Ai Sugiyama.[2] Hantuchová won her second singles match WTA Tour title in March 2007, beating Svetlana Kuznetsova at Indian Wells again.[17] She then won her third singles Tour title in October 2007, beating Swiss player Patty Schnyder in Linz in Austria.[18] Hantuchová lost in the semi-final of the 2008 Australian Open to Serbian player Ana Ivanović.[19] She also lost in the second round at Wimbledon in June 2008.[2] Since the semi-final appearance, Hantuchová has failed to make it beyond the fourth round in any of the Grand Slam tournaments.[2]

Hantuchová has also played tennis for Slovakia in an international tennis competition called the Fed Cup. As of July 2011, she has played 44 matches and won 29 of them.[20] She helped Slovakia win the Fed Cup in 2002.[21] In 2004, she played for Slovakia in the Olympic Games in Athens, Greece.[2] She is sponsored by sportswear company Nike and racket manufacturer Prince.[6][7] As of October 2011, she has won over $7.9 million from playing tennis. She is the first Slovak woman to win this much money just from tennis tournaments.[2] 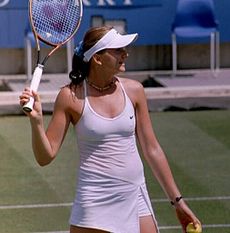 The following table shows how far Hantuchová progressed in each of the Grand Slam singles tournaments she has played in.[6]

Hantuchová did not play in the French Open in 2008 because she suffered a stress fracture on her right heel. 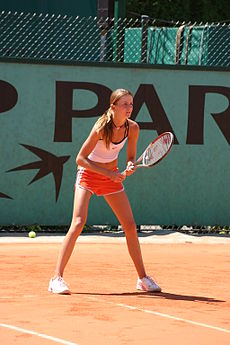 Hantuchová at the French Open in 2006

The following table is a summary of the Women's Tennis Association and Grand Slam tournaments won by Hantuchová (as of October 2011): 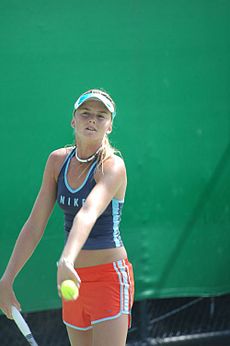