Lithuania is a country in northern Europe[6] on the eastern shore of the Baltic Sea. Lithuania is a member of the European Union, NATO, and several other organizations.

Vilnius is the capital and largest city. About 3,500,000 people live there. The official language is Lithuanian which is spoken by more than 82% of the people.

The colors of the Lithuanian flag are yellow (at the top), for the sun, green (in the middle), for the fields, and red (at the bottom), for the blood of Lithuanians fighting for its independence.

Lithuania began to turn into a country in the 7th–9th centuries from Baltic nations group. The Balts, the ancestors of Lithuanians and Latvians, came to area between Nemunas, Daugava rivers and the Baltic Sea, from a supposed original homeland of the Proto-Indo-European languages. Many scientists think they came there sometime in the 3rd millennium BC.

The traditional date of the beginning of the country is 1236 when the Battle of Šiauliai (Battle of Sun) took place and was won by the Lithuanians.

Lithuania (at that time - The Grand Duchy of Lithuania) had made a Treaty with Poland in 1569. The country was taken over by the Russian Empire in 1795. It got back its independence on the February 16, 1918. It was taken over by Soviet Union in June 16, 1940, after Germany from 1941-1944 and then the Soviet Union from 1944-1990. Lithuania re-declared its independence on March 11, 1990. Currently Lithuania is an independent, semi-presidential, democratic republic. 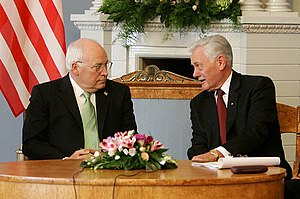 Valdas Adamkus, a former President and US vice-president Dick Cheney in Vilnius

Lithuania has been a member of NATO and the European Union since 2004.

Lithuania is a semi presidential republic, that restored its independence and democracy in 1990. Since then, very important reforms were made and Lithuania is now declared as a democratic state that grants the human rights.

The Constitution that was adopted in 1992 declares, that the leader of the country is the President, who must be elected to take his office. The elections are held each 5 years. If President broke their oath, they can be fired by the Parliament. The President also represents Lithuania and he is also a commander-in-chief.

The legislative power of Lithuania is Seimas, or the Parliament. There are 141 members of Seimas who are elected for 4-year-terms. Seimas passes the laws that must be executed by the Government, that is formed in Seimas and it must be accepted by the President. The Prime Minister is set and fired by the President.

The justice is under the power of the courts. The supreme court in Lithuania is the Constitutional Court.

The counties and municipalities in Lithuania

Lithuania is divided into 10 counties, 60 municipalities and 500 elderates. The counties are:

Lithuania is a country in northern Europe. Its neighbours are Poland in the south west, Russia (Kaliningrad) in west, Latvia in north and Belarus in the east. Lithuania borders the Baltic sea and 99 kilometres of it belong to Lithuania. The highest hill is Aukštojas (294 metres high), the largest lake is Drūkšiai Lake. 31 % of the land suitable for farms.

Lithuania is divided into 5 cultural regions according to their past and traditions:

Lithuania has a fast growing economy. It grew up to 7 % in the first quarter of 2008.

Emigration still contains a problem. Acoording to the official data, emigration in 2006 was 30% lower than previous year, with 3 483 people leaving in four months.

About 80% of people in Lithuania are Lithuanians. There are large national minorities:

Lithuanian is spoken by 82% of the people and it is the only official language. Polish is used mostly in Vilnius County where Polish politicians are elected to represent the Polish minority. The documents and street names must be in Lithuanian. 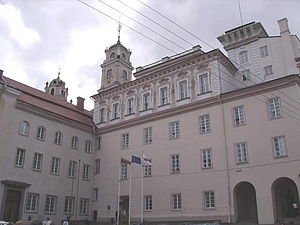 The nursery schools and the kindergartens are the first-level education forms. However, they are not compulsory. The children start attending the primary school at age 7, where educational programs last for 4 years; then they must start attending secondary school (5th to 10th grades). After finishing 8th or 10th grade, the student can continue learning at the high school or choose courses at the vocational college. The students who finish the high school can join colleges and universities. Higher education is free for the students whose annual median of grades is 8 or higher. The others have to pay 500 Litass per semester at least.

The most popular TV stations are:

The oldest legal newspaper in Lithuania is the Polish Kurier Wilenski. It was first published in the 18th century and is now only popular with the Polish community. The biggest selling newspapers are:

Internet news portals are very popular in Lithuania. They have the latest information and also let people make comments. The most popular Internet sites with news and information are: