In 1907, the city of Boulder passed an anti-saloon ordinance. This law said that saloons and bars could not do business in the city, and that people could not drink alcohol.[9] In 1916, the entire state of Colorado started prohibition. In US History, the "Prohibition Era" was a time when all alcohol was illegal. People could not make, drink, buy, sell, or serve alcohol. Prohibition ended in 1933, when the Twenty-first Amendment to the United States Constitution was passed by Congress.[10]

The City of Boulder is in Boulder Valley. This is a place where the Rocky Mountain meet the Great Plains. To the West of the city are some rock formations called the Flatirons. These are large flat pieces of sedimentary stone that are tilted up on the foothills. The Flatirons are famous as a symbol of Boulder.

Flagstaff Mountain overlooks Boulder. The city is a few miles east of the Continental Divide and about 25 miles (40 km) northwest of Denver. Denver International Airport is about 50 miles (80 km) southeast of Boulder.[13] The city gets its water from Arapahoe Glacier and Boulder Creek.[14] 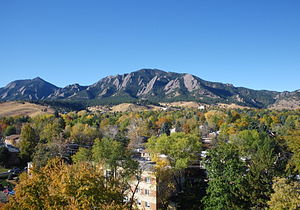 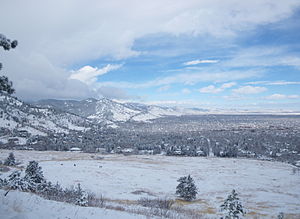 Snowfall is common in Boulder throughout the winter

Boulder has a dry climate. (Much of Colorado is dry.) It has many sunny or mostly sunny days every year. According to the Köppen climate classification, the city's climate is "semi-arid" (Köppen BSk).[15] Winters are cool, but sometimes can get very cold. During the winter, the high temperature is usually in the mid- to upper- 40s°F (7–9 °C). The low temperature in winter can be below −10 °F (−23 °C) on a few nights. Usually it does not stay below 0 °F (−18 °C) for many days at a time.

Even though it is cold in the winter, Boulder does not get as much snow as the mountains. This is because of something called orographic lift. This means that the mountains in the west dry out the air as it passes over the Front Range. By the time the air gets to Boulder, most of the water and snow has been removed. Sometimes there are heavy snow storms, but not too often. The average amount of snow in Boulder is 85 inches (220 cm) per season, total. Usually only a few inches fall at a time. Because Boulder is so high up, the sun is very strong and hot, so the snow melts quickly. Sometimes Chinook Winds will make the temperature go up quickly and have the snow melt even faster.

Boulder is a Home Rule Municipality. In Colorado, this means that Boulder's government was formed according to three different legal documents. These documents are: Article XX of the Constitution of the State of Colorado; Title 31, Article 1, Section 202 of the Colorado Revised Statutes; and Boulder's own Home Rule Charter.

Boulder is very liberal and very Democratic. As of April 2012[update], registered voters in Boulder County were 41% Democrat, 20% Republican, 1% other parties, and 38% unaffiliated (not any specific party.)[18] Boulder county includes the conservative suburbs of Boulder City. Boulder is sometimes called the "People's Republic of Boulder" or "25 square miles surrounded by reality." This is a lot like nicknames given to other liberal cities that have more conservative areas surrounding them, like Columbia, Missouri, Madison, Wisconsin, and Austin, Texas.