In architecture, a folly is a building usually constructed strictly for aesthetic pleasure.[1] Originally, buildings were made to provide shelter or to house people. Follies are just decoration; they no longer have a building's original function. They were first constructed to put accents into parks and estates. "Folly" is used in the sense of fun or light-heartedness, not in the sense of something ill-advised.

Decorative ruin in Schönbrunn, the royal palace in Vienna

In general, follies have the following properties:

In England, these structures are also called "eye-catchers". This points to their basically decorative nature.

Follies fall within the general realm of fanciful and impractical architecture, and whether a particular structure is a folly is sometimes a matter of opinion. However, there are several types which are related but which can be distinguished from follies.

Follies began as decorative accents on the great estates of the late 16th and early 17th centuries but they flourished especially in the two centuries which followed. Many estates were blessed with picturesque ruins of monastic houses and (in Italy) Roman villas; others, lacking such buildings, constructed their own sham versions of these romantic structures. Such structures were often dubbed "[name of architect or builder]'s Folly", after the single individual who commissioned or designed the project. However, very few follies are completely without a practical purpose. Apart from their decorative aspect, many originally had a use which was lost later, such as hunting towers. Follies are misunderstood structures, according to The Folly Fellowship, a charity that exists to celebrate the history and splendour of these often neglected buildings.

Follies are often found in parks or large grounds of houses and stately homes. Some were deliberately built to look partially ruined. They were especially popular from the end of the 16th century to the 18th century. Theme parks and world's fairs have often contained "follies", although such structures do serve a purpose of attracting people to those parks and fairs.

The Irish Potato Famine of 1845-49 led to the building of several follies. The society of the day held that laissez faire, not a welfare state, was the appropriate form of civil management. The concept of a welfare state was a century away, and at that time reward without labour, even to those in need, was seen as misguided. However, to hire the needy for work on useful projects would deprive existing workers of their jobs. Thus, construction projects termed "famine follies" came to be built. These include: roads in the middle of nowhere, between two seemingly random points; screen and estate walls; piers in the middle of bogs; etc.[2]

Follies can be found worldwide, but there seem to be many in Great Britain.

The Bory Castle at Székesfehérvár, Hungary 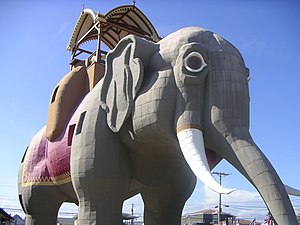