The Great Hammerhead Shark (Sphyrna mokarran), is the largest species of the Hammerhead shark group. It can be identified by other Hammerhead Sharks by the shape of its "hammer" (called the "cephalofoil"), which is wide and has an almost straight margin at the front, and by its first dorsal fin which is tall, and is sickle-shaped. 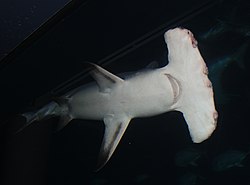 The underside of the Great hammerhead shark

Great Hammerhead Sharks are around 2.85 to 5.5 meters long, and weigh around 450 kg, but the longest ever found was 6.1 meters long. The heaviest ever found was a 4.4 meter long female, which weighed 580 kg, and was caught off Boca Grande, Florida. But the female weighed this much because it was pregnant. The top part of the Great Hammerhead Shark is grey-brown or green, and the belly is white.

The Great Hammerhead Shark is found in tropical waters around the world, between the latitudes 40°N to 37°S. In the Atlantic Ocean it is found from North Carolina to Uruduay, including the Gulf of Mexico and the Caribbean Sea, and from Morocco to Senegal, and the Mediterranean Sea. It is found all along the rim of the Indian Ocean, and in the Pacific Ocean from the Ryukyu Islands to Australia, New Caledonia, and French Polynesia, and from southern Baja California to Peru. It's said to be found off Gambia, Guinea, Mauritania, Sierra Leone, and Western Sahara, but this has not been confirmed. Great Hammerhead Sharks can be found from inshore waters which are less than 1 meters deep, to a depth of 80 meters offshore. They live mainly in coral reefs, but have been found in lagoons and deep water near land.

Great Hammerhead Sharks are known to hunt at dawn and at dusk. They feed on crustaceans like crabs and lobsters, molluscs like squids and octopuses, bony fish like tarpon, sardines, herrings, sea catfish, toadfish, porgies, jacks, croakers, groupers, flatfish, boxfish, and porcupine fish. They also eat other sharks like smoothhounds and grey reef sharks. Great Hammerhead Sharks have been known to eat others of their kind.

The Great Hammerhead Shark has been listed as endangered by the International Union for the Conservation of Nature (IUCN), because of fishing for its fins, which are made into shark fin soup, for its skin which is made into leather, and their liver oil for vitamins. Populations of the Great Hammerhead Shark have decreased by 50% because of fishing.