Ipswich Town Football Club (Ipswich Town) is an English football club. It is based in Ipswich, Suffolk county. The club was founded in 1878. The club's home stadium is Portman Road.

Ipswich Town currently play in the EFL League One, having been relegated from the EFL Championship in 2019, after 17 years in the division. The club has won the Football League First Division once, in 1962 and the FA Cup in 1978. They have also been successful in European football. They won the UEFA Cup in 1981. The current chairman of the club is Mike O'Leary. The current manager is Paul Cook. Two of the club's previous managers have gone on to manage the England national football team, and one has gone on to manage the Scotland national football team. A notable previous manager is Roy Keane, a legend for Ireland and Manchester United.

Ipswich Town F.C. was started as an amateur team in 1878 and was called "Ipswich A.F.C."[2] The club played a lot of games in the local area and won several cup competitions.[3] In 1936, they became a professional club and joined a league called the "Southern League" which they won in their first season. In 1938, they were elected to join The Football League and played in "Division Three (South)" until the end of the 1954 season, when they were promoted to "Division Two".[4]

In 1961, Ipswich Town won their division and were promoted to the highest level of English football, "Division One". The club went on to win this division the next season. This let them play in European football competition, The European Cup the following season. Two years later,they were sent back to "Division Two" where they stayed for four years before being promoted to "Division One" again, in 1968. Soon after, Bobby Robson became the manager of the club and led them to success in both English and European football. In 1978 Ipswich won the FA Cup at Wembley Stadium, beating Arsenal F.C. 1–0. Further success came in 1981 when Ipswich defeated Dutch team AZ Alkmaar.[5]

Bobby Robson was asked to become manager of the England national football team in 1982 so he left the club. Ipswich did not do well in the following seasons and were relegated to "Division Two" in 1986. They remained here until 1993 when they won the division and promotion into the new English Premier League. Two poor seasons followed, including a 9–0 defeat by Manchester United, still the biggest defeat in Premier League history.[6][7] In 1995 Ipswich were relegated once again and stayed in second division of English football until they were promoted in 2000 after they beat Barnsley in the play-offs at Wembley 4–2.[4]

In their first season in the Premier League, Ipswich finished fifth; This meant they qualified to play in the UEFA Cup the next season. Although the club played well in the European competition, they were poor in the Premier League. They finished bottom and were relegated to Division One, now called Football League Championship.[4] Ipswich were relegated to League One after the 18/19 season, finishing last in the championship.[8]

One of Ipswich Town's nicknames is The Blues.[9] This is because the traditional kit the players wear is usually mostly blue. When Ipswich play against other teams who also wear blue, they change to an alternative kit, sometimes called an "away" kit. The "away" kit has been different colours including orange, white, red and black vertical stripes. Currently, the away kit is plain white.[10]

The crest which is on the shirts and shorts of the kit shows a horse, with one hoof resting on a football. Underneath the horse is a river—this represents the River Orwell which flows through the town.[11]

Ipswich Town play their home games at a stadium called Portman Road. The club started playing games here in 1884.[12] The stadium can hold over 30,000 people. Outside the ground there are statues of both Bobby Robson and Sir Alf Ramsey.[13][14]

In 2003, England played a game against Croatia at Portman Road.[15] England won the game 3–1.[16] The England youth team has also played at the stadium several times.[17]

Other sports have been played at Portman Road, including athletics, hockey and American football. The stadium has also been used for events other than sports. It has been used for concerts by Elton John,[18] R.E.M.,[19] Red Hot Chili Peppers,[20] and Rod Stewart.[21] 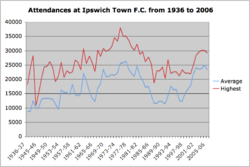 Local fans call the team "Town" because it is a shortened version of the team name. Some people also call Ipswich the "Tractor Boys". This nickname is used a lot by newspapers.[22][23] Many Ipswich fans use this name as a joke rather than letting it be an insult.

The main rival of Ipswich Town is Norwich City who are based in Norfolk. When these two teams play, the game is called the "East Anglian derby". The derby is usually referred to as the 'Old Farm' derby, a take on the 'Old Firm' derby played in Scotland between Glasgow Celtic and Glasgow Rangers (now 'The Rangers').[24][25]

Mick Mills holds the record for Ipswich league appearances. He played 591 matches between 1966 and 1982. The club's top league goalscorer is Ray Crawford, who scored 203 goals between 1958 and 1969. Ted Phillips holds the record for the most goals scored in a season, 41 in the 1956–57 season. Allan Hunter has played the most international games while at the club, making 47 appearances for Northern Ireland.

The club's widest victories in the league have been their 7–0 wins against Portsmouth in 1964, against Southampton in 1974 and against West Bromwich Albion in the First Division in 1976. Their biggest defeats in the league were 10–1 against Fulham in 1963 and 9–0 against Manchester United in 1995.

The highest number of people to watch Ipswich at Portman Road is 38,010 for a sixth round FA Cup match against Leeds United on 8 March 1975.

The largest amount of money received for an Ipswich player is £6.5 million, from Newcastle United for Kieron Dyer in July 1999. The most the club has spent on a player was £4.75 million for Matteo Sereni from Sampdoria in July 2001.[26]

Paul Cook is the current manager of Ipswich Town, replacing Paul Lambert. Lambert joined Ipswich Town in October 2018, after Paul Hirst was fired 2 days before. Lambert's previous job was Stoke City in the Premier League, where he spent 4 months in charge.

Two managers of Ipswich Town have gone on to become the manager of the England national football team. The first was Sir Alf Ramsey. He also won the World Cup for England in 1966. The second was Sir Bobby Robson who got England to the semi-finals of the 1990 World Cup finals. George Burley became manager of the Scotland national football team in January 2008, for 22 months.

This audio file was created from an article revision dated 2009-09-05, and does not play the most recent changes to the article. (Audio help)
More spoken articles