New Zealand (known as Aotearoa in the Māori language) is an island country in Oceania. It is a sovereign state in the south-western part of the Pacific Ocean. It is made up of two large islands (the North Island and the South Island) and many smaller islands. These islands are located to the southeast of Australia. New Zealand was one of the last places in the world that humans discovered, because it is a long way away from most of the world. During its time without humans, New Zealand was a good place for an unusual range of plants and animals to develop.

The capital city of the country is Wellington, and the largest city is Auckland. Both of these cities are on the North Island. The largest city on the South Island is Christchurch.

In 2010, a newspaper in NZ said that New Zealand was the 8th happiest country in the world.[11]

In the Māori language, the country is called Aotearoa, which means "Land of the Long White Cloud". Ao means “cloud”, tea means “white”, and roa means “long”. The name "New Zealand" comes from “Zeeland” (which translates to "Sealand") in Dutch, after the islands were seen by Dutch explorer Abel Tasman. Zeeland is a province of the Netherlands.

New Zealand is a constitutional monarchy and parliamentary democracy. The head of state is Queen Elizabeth II. The Prime Minister is Jacinda Ardern, leader of the Labour Party.

New Zealand has made itself a Nuclear Free Zone: They do not use nuclear power and do not allow nuclear weapons or nuclear powered vessels in their territory.

Elections are held every 3 years.[12]

The people of New Zealand often call themselves Kiwis. This name is derived from the kiwi, a flightless native bird that is considered the country's national bird.

Most New Zealanders live in urban areas, with the other 27% living in small towns or farming communities.

Wellington is the capital of New Zealand. Auckland is the largest city, with around 1 million people. Other cities in the North Island include Hamilton, Tauranga, Napier/Hastings, New Plymouth, Whanganui, and Palmerston North. South Island cities include Christchurch, Dunedin, Nelson, Invercargill and Timaru. 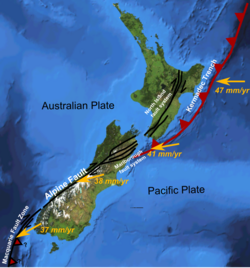 Major fault zones of New Zealand. It shows how the Pacific and Australian plates move against each other.

New Zealand sits at the boundary between the Australian and Pacific continental plates. When these two plates bumped into each other ('collided'), the Pacific plate moved under the Australian plate, north of the South Island. As a result, there has been lots of volcanic activity. South of the South Island, the Australian plate moves under the Pacific plate instead. The plates slide past each other in the South Island, where they have pushed up the Southern Alps. Because of these two colliding plates, New Zealand often has earthquakes. One of the best known is the 2010-2011 group of earthquakes that hit the Christchurch area.

The diagram shows that the North Island is on the Australian plate, but most of the South Island is on the Pacific plate. New Zealand is still geologically active, and will remain so as long as the islands are sitting above the plate boundary.[16][17][18]

New Zealand was isolated from the rest of the world for a long time. It split from Australia 83 million years ago. Because of this, there are many plants and animals that only live in New Zealand. Before humans came to New Zealand, there were no mammals, except three species of bat and marine mammals such as seals, dolphins, and whales. Instead, New Zealand has many different kinds of bird. New Zealand has several species of flightless bird, including the kiwi and Kakapo. For the lizards, especially important is the Tuatara, the only living member of a whole order of reptiles.

New Zealand used to have more rare species, but some, mostly birds, were hunted to extinction early in its history. The giant Moa, Dinornis, is a famous example. The group of birds which the moa belongs to had been in existence since the Cretaceous period. Humans arrived in New Zealand about a thousand years ago, when many moa were living, especially on the South Island. Archaeological sites with evidence of moa hunting are all over New Zealand. The moa became extinct about five hundred years ago.[19] Extinctions closer to today have been caused by habitat change and introduced species like rats, dogs, cats, and possums, which kill the native birds and lizards, or eat their eggs.