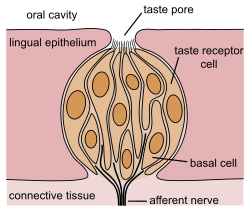 Taste is one of the senses experienced by humans and other animals. It is felt by the tongue while eating, and is used to sense the flavor of food that is in the mouth. Humans can sense five tastes: sweet, sour, bitter, salty, and umami.

Humans have taste receptors on taste buds and other areas including the upper surface of the tongue and the epiglottis.[1][2] The perception of taste is organised by a special part of the cerebral cortex. The gustatory cortex is responsible for the perception of taste.

Many common foods are bitter, like coffee, bitter melon, olives and citrus peel.

Bitterness is of interest to those who study evolution, as well as various health researchers.[3][4] Many naturally bitter compounds are toxic. The ability to detect bitter-tasting, toxic compounds at low thresholds may have a protective function, but some test have not confirmed this.[5] Plant leaves often contain toxic compounds, and among leaf-eating primates there is a tendency to prefer immature leaves. Young leaves tend to be higher in protein and lower in fiber and poisons than mature leaves.[6] Amongst humans, various food processing techniques are used worldwide to detoxify otherwise inedible foods and make them palatable.[7]

Savouriness (or savoriness) is the taste of savoury foods. It is also known by the Japanese word Umami (旨味, うまみ?), and comes from umai, which means 'yummy'. This taste was known for a long time, but only became an official scientific term in 1985.[8]

To taste savoriness, your tongue has special parts that detect amino acids that are in foods like meats and cheeses.[9]