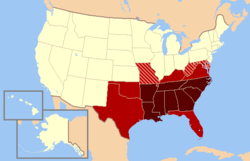 Most of the South is a land of long, hot summers. Winters are mostly short and cool. There is much rainfall. This combination gives the South a long growing season. Important crops include cotton, tobacco, peanuts, and peaches.

The States that make up "The South" are usually considered to be:

The cuisine of the Southern United States is distinct from other regions.

Except for Florida and Texas, most of the South did not have as many immigrants arriving from other countries as the rest of the United States did, in the late 19th and 20th centuries. Most of the people in the South are of English, Scottish, or Irish ancestry, or the descendants of African-American slaves. Some Southerners identify themselves as being of "American" ancestry.