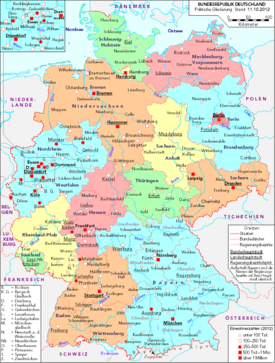 States of Germany (in German)

The Federal Republic of Germany (FRG) has 16 states (German: Bundesländer, singular: Bundesland). The biggest is Bavaria and the smallest is Bremen. Most of them were created after the Second World War, although their historical roots can be traced back to the early Middle Ages in some cases.

Population and area in km² as of November 2014.