The Caracal, also called Persian lynx or African lynx, is a wild cat. Caracals are similar to lynxes, but are more related to the Serval. Caracals are the fastest of the small cats.

The Caracal is 65 cm in length (about 2 feet), plus 30 cm tail (about 1 foot). It has longer legs and a look very similar to a lynx. The colour of its fur may be wine-red, grey, black, or sand-coloured (a type of yellow). Young caracals have red spots on the fur, but the only markings adults have are black spots above the eyes. A special part of the caracal body are its long black ears - the word "caracal" come from the Turkish word karakulak ("black ear"). Their ears are controlled by 20 different muscles, to help them find the animals they hunt. 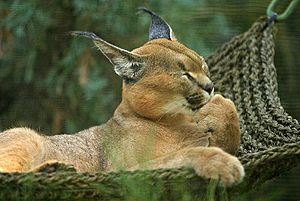 A caracal in the San Diego Zoo

Caracals live in Africa and West Asia. Their habitat is dry steppes (areas without trees, covered with grass or shrubs) and semi-deserts, but also can live in places similar to woodlands, savannas, and scrub forests. They live alone or with a mate in a territory.

A caracal may live without drinking for a long time - they get the water from the body of the animals they eat. It hunts at night (but in winter they also hunt in the daytime) for rodents, birds, and hares. It is not usual, but sometimes they hunt small antelopes or young ostriches. They prefer to eat only the external meat of the mammals they hunt, and do not eat the internal organs, and they also do not like eating fur. But they eat the feathers of small birds and rotten meat.

They can hunt birds very well; a caracal is able to snatch a bird in flight, sometimes more than one at a time. Caracals can jump and climb every well, which enables them to catch hyraxes better than any other carnivore.

Because they can learn tricks and get accustomed to live with humans, caracals are sometimes kept as pets (especially in the United States and some European countries). Farmers in Africa do not like them, because sometimes they enter in farms and eat chickens and other animals. So they make their dog chase the caracal.

It is not easy to see caracals in nature because they hide very well. Drivers in countries where caracals live, for example, Kenya and Botswana, see many animals next to roads, but it is very rare a sighting of a caracal.

There are many species of caracals. See them and where they live: