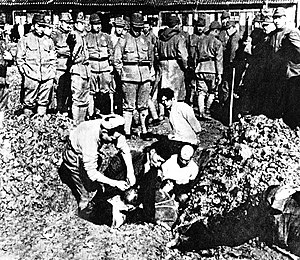 The Nanking Massacre was a genocide that took place in Nanjing, China during the Second World War.[1] A German diplomat reported to Berlin that 'besides mass executions by machine gun fire, other more individual methods of killing were employed as well, such as pouring gasoline over a victim and setting him afire.'[2] Some sources put the number of people murdered as high as 300,000, but a more likely figure is closer to 200,000.[2] Some of the Japanese soldiers were executed after World War II by the Allies for their war crimes. Even today, many Japanese people naively believe that the Nanking Massacre was faked.

Help Improve This Page: Please contact us to become an approved KidzSearch editor and provide your credentials. Provide feedback on this article in our Nanking Massacre Forum