A nuclear weapon is a weapon that suddenly releases the energy in the nucleus of certain types of atoms. When triggered, these devices release a huge amount of energy in the form of an explosion. Nuclear weapons are also known as "atomic bombs", "atom bombs", or "A-bombs". Nuclear weapons are very powerful, and one nuclear weapon can destroy a city. They get their energy by changing some of their matter into energy. This is called a nuclear explosion. Nuclear explosions are difficult to ignite and control, and require uranium or plutonium that has been enriched for reactive isotopes. These isotopes are not concentrated enough in natural uranium to cause explosions. 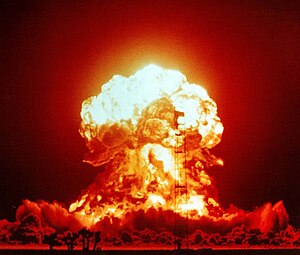 Nuclear explosion test in Nevada in 1953.

The first nuclear weapons were created by the United States during World War II and used against the cities of Hiroshima and Nagasaki in Japan. This is the only time in history when nuclear weapons have been used in combat. This development was called the Manhattan Project. The Manhattan Project took place in Los Alamos, New Mexico. The first atomic bomb was tested at the Trinity site at White Sands in southern New Mexico.

Nuclear weapons are made from the elements uranium or plutonium. Certain forms of these elements can be made to undergo nuclear fission and have a nuclear chain reaction. This produces a very large amount of energy and radiation, and will kill any people or animals within several kilometers. Much of the radiation is X-rays, which heats air to produce a huge nuclear fireball. The rapid expansion of the fireball produces a dangerous shock wave that destroys houses or buildings even several kilometers away. It will eventually kill people farther away than several kilometers depending on how much radiation the person received. The mutations in the DNA cause cancer and radiation poisoning. Nuclear bombs release fallout, which is nuclear material and dust that has been irradiated and became radioactive. This poisonous dust is blown by the winds for tens or hundreds of kilometers, and can remain dangerous for several years.

A hydrogen bomb, or fusion bomb, is a nuclear weapon which utilizes hydrogen isotopes (deuterium and tritium) as another type of fuel. Hydrogen bombs can be many hundreds of times more powerful than fission bombs. Despite the name, in hydrogen bombs in use, the hydrogen is only there to produce enough neutrons to also detonate a casing made of natural uranium. The fuel in hydrogen bombs is thus mostly unrefined uranium. 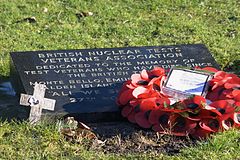 Bringing a nuclear weapon to its target can be as complex as making one. A nuclear explosive device can be placed in a bomb or artillery shell, or into a missile, which is called a nuclear missile. Nuclear missiles can be carried by aircraft, submarines, or trucks, or they can be placed into underground missile silos. Strategic bomber aircraft like the B-36 Peacemaker, B-52 Stratofortress and B-2 Spirit are used to carry nuclear weapons.

They are also carried by missiles, such as intercontinental ballistic missiles (ICBM), or submarine-launched ballistic missiles (SLBM's). Some missiles travel to the border of space, and then launch a number of separate nuclear weapons back toward the ground, and each one can travel to a different target. This is called a MIRV Warhead, or Multiple Independent Reentry Vehicles. Very large nuclear bombs have been produced, but in practice a MIRV can produce as much damage from several smaller explosions.

Nuclear weapons cost a lot of money to make, because the materials they are made of are very rare and it takes many scientists to make them. But many countries have managed to create nuclear weapons and many have them today. In the order that they first made nuclear weapons, they are: United States (1945), Russia (1949), United Kingdom (1952), France (1960), China (1964), India (1974), and Pakistan (1998). Many other countries are thought to have nuclear weapons secretly or to be trying to make them. Some countries formerly had them but say they have given them up. The spread of nuclear weapons is called nuclear proliferation.

Some countries have lost nuclear weapons while transporting them. There are 92 atom bombs lost at sea from all countries that have them. The bombs were lost in 15 different cases.[1][2][3] However, there could be more lost bombs.

This is a list is of the main nuclear explosions which have happened. As well as the atomic bombings of Hiroshima and Nagasaki, the first nuclear test of a given weapon type for a country is included, and tests which were otherwise notable (such as the largest test ever). All yields (explosive power) are given in their estimated energy equivalents in kilotons of TNT.

Over 500 atmospheric nuclear weapons tests were done at various sites around the world from 1945 to 1980. As public awareness and concern grew over the possible health hazards associated with exposure to nuclear fallout, various studies were done. A Centers for Disease Control and Prevention study says that nuclear fallout might have led to 11,000 excess deaths, most caused by thyroid cancer linked to exposure to iodine-131.[6]

Notable individuals who have been associated with nuclear weapons and related issues include:[7][8][9][10][11]