As of 2006, West Nile virus lived in every yellow country on this map

West Nile virus is spread by mosquitoes, who get the virus from birds. If a mosquito bites a bird that has WNV, and then bites a human, that person can get West Nile Virus.[1]

West Nile virus was first discovered in 1937, in the West Nile area of Uganda, in East Africa.[1] (This is how the virus got its name.) However, before the 1990s, there were very few cases of WNV. Then there was an outbreak in Algeria in 1994 and another in Romania in 1996.[1] By 2004, the virus had spread to North America,[4] the Caribbean islands, and Latin America. It continues to spread through Africa, Asia, Australia, Europe, the Middle East, Canada, and the United States.[4] In 2012, one of the worst West Nile virus epidemics yet happened in the United States; 286 people died.[5][6]

About 80% of people who get West Nile virus have no symptoms.[7]

When a person does get symptoms, they usually do not appear until 2 to 15 days after the person got the virus. (This is called the virus's incubation period.)[7]

West Nile fever happens in about 20% of people with WNV. It causes a high fever and flu-like symptoms. Usually, the symptoms are not too bad, and get better after 3 to 6 days. Symptoms may include:[7]

Neuroinvasive disease is when the West Nile virus infects the central nervous system (the brain and spinal cord). This happens in less than 1% of people who get West Nile virus.[8] However, in those people, it can cause very serious problems. These problems include:

WNV can cause some other complications that do not affect the neurological system. These complications are very uncommon. They include:

At first, a medical professional usually makes a possible diagnosis of West Nile virus based on a person's symptoms, where they live, and when and where they have traveled. The World Health Organization says that doctors should suspect West Nile virus if a patient:[1]

West Nile virus can be diagnosed for certain by:

There is no known treatment or cure for WNV. There are no known anti-viral medications (medicines which kill viruses) which will kill the West Nile virus. Doctors can only provide "supportive care," which means they can only treat the symptoms of WNV. For example, they can give fluids through a needle placed into a vein if a person is very dehydrated; help the person breathe if needed; and give medications to prevent them from getting any other infections.[1]

Though this is not common, a person with West Nile virus can give another person the virus. This can happen if: 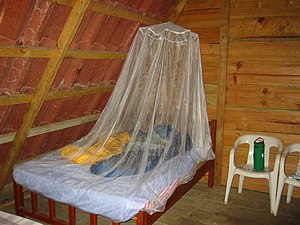 Low-cost mosquito net for a bed

In contrast to the 4 currently available West Nile Virus vaccines for horses,[26] there is no human vaccine available to prevent West Nile virus infection.[1] Six vaccines have been trialled in humans with the most successful only proceeding to Phase II trials.[27] The best way for people to protect themselves against West Nile virus is to protect themselves against mosquitoes. There are many ways to do this. For example:[28]

Scientists can trap mosquitoes and birds, and test them for West Nile virus to see if the virus is spreading in a certain area.[29] If it is, they can do things like spray pesticides to kill mosquitoes.