Suicide is when a person chooses to kill himself or herself.[1] When someone kills himself, people say that he has "committed suicide". When a person thinks about killing themselves, the person is said to be suicidal.

When people start having thoughts about killing themselves it is, or should be, a medical emergency. They should get a suicide risk assessment as soon as possible.

There are many reasons why a person might think about committing suicide. Most people who are suicidal have some type of mental condition or illness. They may have a chronic condition, which means it has been going on for a long time. But it may be an acute condition – which means the first symptoms of mental illness happened rather quickly.

Depression is the mental illness that most often causes a person to have suicidal thoughts. Depression may also be a symptom of other mental or medical disorders.

Depression which leads to suicidal thoughts may also be caused by stress, and events in a person's life. Losing a job, having an physical illness or being a victim of a crime or natural disaster may also cause depression. Feelings of loneliness caused by not having family or friends can be risk factors for suicide, there are also many others.

Suicide is one of the top three causes of death for young people aged 15–35 years-old and the second leading cause of death for college students. Every 3 seconds a person somewhere in the world attempts to kill themselves and every 40 seconds some commits suicide. For every suicide at least six other people are seriously affected.(WHO 2000)

Although depression is the main factor in suicide, it is also treatable and suicide is often preventable. 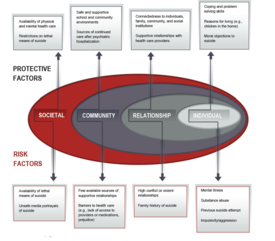 Most people who commit suicide have a mental disorder, the rates vary, according to study, between 85%-95%. Depressive disorders account for about 80% of these numbers, schizophrenia 10% and dementia and delirium about 5%. Among those who have a mental disorder, 25% also have alcohol abuse issues. People who abuse alcohol have a 50% greater risk of suicide compared to those who do not.[2]

While acts of self-harm are not considered as suicide attempts, the presence of self-harming behavior may increase the risk of suicide.[3]

Substance abuse is the second most common reason for feeling suicidal or dying from it. Only two serious mental illnesses; depression and bipolar disorder cause more harm.[9] People who have a short history of drug abuse as well as long time drug users are both a suicide risk.[10] When a drug abuser is also sufffering from great sadness or grief, suicide is even more common.[11] More than half of suicides are at least partly due to alcohol or drug use. About one-fourth of suicides are committed by those sick with drug addiction or alcoholism. In teenagers and youth, the percent is even higher.

Problem gambling is often associated with increased suicidal ideation and attempts compared to the general population.[12][13][14]

There is a link between suicidality and medical conditions, including chronic pain,[19] mild brain injury, (MBI) or traumatic brain injury (TBI).[20][21] The feelings of wanting to commit suicide lasted even after adjusting for depressive illness and alcohol abuse. In patients with more than one medical condition the risk was higher.[22][23]

Problems with sleeping, such as insomnia[24] and sleep apnea may be risk factors for depression and suicide. In some instances the sleep disturbance itself may be the risk factor independent of depression.[25]

People being treated for mood disorders should receive a medical evaluation. This should include a physical examination and various laboratory tests. This is done to rule out mood disorders caused by medical conditions and also to insure safety if medications are prescribed for treatment.[26] Many medical conditions can cause psychiatric symptoms.

Some mental disorders identified as risk factors for suicide often may have an underlying biological basis.[28][29]

Genetic inheritance accounts for roughly 30–50% of the variance in suicide risk between individuals.[40][41][41] Having a parent who has committed suicide is a strong predictor of suicide attempts.[42][43] Epigenetics, the study of changes in genetic expression in response to environmental factors which do not alter the underlying DNA, may also play a role in determining suicide risk.[44][45][46]

How the media shows news stories of suicide may have a negative effect[47] and trigger the possibility of copycat suicides, also known as the Werther effect.[48][49] This risk is greater in teenagers and young adults who may often romantacize death.[50][51][52] The opposite of the Werther effect is the Papageno effect in which coverage of effective coping mechanisms and coping in adverse circumstances, may have protective effects.[53]

There are a number of other risk factors, availability of a means to commit the act, family history of suicide, previous head injury,[54][55]unemployment, poverty, homelessness, and discrimination,[56] a history of childhood physical or sexual abuse,[57] or having spent time in foster care.[58][59][60]

Suicide prevention tries to reduce the number of suicides by using protective measures. Some ways limit access to the most common ways to commit suicide. These include taking away guns, poisons and drugs. Studies have shown that good treatment of depression and alcohol and drug abuse can reduce suicide rates. So does follow-up contact with those who have made a suicide attempt.[63]

In many countries, people who are at high risk of hurting themselves, can check themselves into a hospital emergency department. This may also be done on an involuntary basis by police, doctors or judges. The person will be placed on suicide watch until a doctor or mental health professional decides whether inpatient care at a mental health care facility is needed.

"SOS Signs of Suicide" is a suicide prevention program used in secondary schools for students between 13 to 17-years-old. The program uses both education about suicide and screening for suicide risk. There are fewer suicide attempts in students who have taken part in the program compared to those who have not.[64]

World suicide rates in 2009. Grey areas are those where there is little or no data.

Worldwide suicide rates have increased by 60% in the past 45 years, mainly in the developing countries and is currently the tenth leading cause of death with about a million people dying by suicide annually, a global mortality rate of 16 suicides per 100,000 people, or a suicide every 40 seconds.[67]

According to 2007 data, suicides in the U.S. outnumber homicides by nearly 2 to 1. Suicide ranks as the 11th leading cause of death in the country, ahead of liver disease and Parkinson's disease.[68] Suicide rates vary a great deal across the world. Lithuania has the highest suicide rate.

30% of deaths by suicide are by people who are intoxicated.(Source:SAMSHA)

Death rates of suicide methods in the United States

The leading methods of suicide are not the same in every country. The leading methods in different regions include hanging, pesticide poisoning, and firearms.[69] A 2008 review of 56 countries based on WHO mortality data found that hanging was the most common method in most of the countries,[70] accounting for 53% of the male suicides and 39% of the female suicides.[71] Worldwide 30% of suicides are from pesticides. The use of this method however varies markedly from 4% in Europe to more than 50% in the Pacific region.[72] In the United States 52% of suicides involve the use of firearms.[73] Asphyxiation (such as with a suicide bag) and poisoning are fairly common as well. Together they comprised about 40% of U.S. suicides. Other methods of suicide include blunt force trauma (jumping from a building or bridge, self-defenestrating, stepping in front of a train, or car collision. Exsanguination or bloodletting, intentional drowning, self-immolation, electrocution, and intentional starvation are other suicide methods. Individuals may also intentionally provoke another person into administering lethal action against them, as in suicide by cop.

Modern medicine treats suicide as a mental health issue. When a person starts having many thoughts about killing his or her self, it is considered a medical emergency.

The Abrahamic religions, (like Christianity, Judaism, and Islam) think that life is sacred. They believe that by killing yourself, you are murdering what God has made, which is bad. For this reason, a person who commits suicide is believed to go to hell by many followers of Abrahamic religions.

The Dharmic and Taoist religions (like Buddhism, Hinduism, Jainism, Taoism, Confucianism, and Shinto) believe that someone who commits suicide will be reincarnated in the next life with a less enlightened soul. However, many people of these religions are more likely to commit suicide because they believe that there will be a next life.[source?] They think that by committing suicide, they may have a better chance in the next life.[source?]

Suicide as a weapon

There are a few very famous examples of suicide attacks in history. The Kamikazes were one example. They were Japanese fighter pilots during WWII, who would try to kill American soldiers (but would also kill themselves in the process) by crashing their planes into American ships. The September 11, 2001 terrorist attacks on the United States were also done by suicide attackers, who flew planes into the World Trade Center buildings and the Pentagon.[74]