The PPSh-41 (Pistolet-Pulemyot Shpagina; Russian: Пистолет-пулемёт Шпагина; "Shpagin machine pistol") is a Soviet submachine gun. It was designed by Georgi Shpagin. The PPSh-41 was supposed to be a cheaper, simpler gun to use than the PPD-40. The PPD-40 was in Soviet service at that time. The PPSh-41 officially replaced the PPD-40 in 1941.[4] The PPSh-41 was supposed to be used by conscripted soldiers with very little training. The PPSh-41 got its ammunition from a magazine. It was also a selective fire submachine gun. It was made mostly of stamped steel. It fired the 7.62×25mm pistol round. The PPSh-41 was used a lot during World War II and the Korean War. It was still in use in Vietnam with the Viet Cong as late as 1970 as the Chinese Type 50 (a copy).

The idea for the development of the PPSh-41 came partly from the Winter War against Finland. It was found in this war that submachine guns were good weapons for close-quarter fighting. The PPSh-41 was developed in mid-1941. It was made in many factories in Moscow. Local Party members were made responsible for making sure enough PPSh-41s were made.

A few hundred weapons were made in November 1941. Another 155,000 were made over the next five months. By spring 1942, PPSh-41 factories were making around 3,000 weapons a day.[5] The PPSh-41's design was good, as it allowed many weapons to be made in a short amount of time (mass production). Other examples of this kind of design were the M3 submachine gun, MP40 and the Sten. Its parts (except the barrel) could be made by unskilled workers. The PPSh-41 used 87 parts, and the PPD-40 used 95. The PPSh-41 could be made in 7.3 hours. However, the PPD-40 took 13.7 hours.[6] The making of the barrel was often made simpler by using barrels made for the M1891 Mosin–Nagant rifle. The rifle barrel was cut in half. From this one rifle barrel, two PPSh-41 barrels were made. The barrel was then altered for the 7.62mm Soviet submachine gun cartridge. [7]

The PPSh-41 was popular in the German armies as well. Captured PPSh-41s were often used by the Germans against their enemies.

After the German Army captured a lot of PPSh-41s during World War II, a program was started. In this program, the weapons would be altered to fire the German submachine gun bullet. This bullet was called the 9mm Parabellum. The Wehrmacht officially called these PPSh-41s the MP41(r). PPSh-41s which were not altered were called the MP717(r). They were given 7.63x25mm Mauser ammunition instead of the Soviet 7.62x25mm bullet. The German military made German-language manuals to teach soldiers how to use the PPSh-41. These were printed and given out across the Wehrmacht.[8]

The Soviet Union also tried the PPSh-41 in close air support. They put dozens of PPSh-41s on some of their planes.[9]

Over 6 million PPSh-41s were made by the end of the war. The Soviets would often give whole regiments or even divisions the PPSh-41. This gave them excellent close-range power.

After the war, a large number of PPSh-41s were given to Soviet client states. They were also handed out to communist guerillas. The North Korean People's Army (NKPA) and the Chinese People's Volunteer Army (PVA) fighting in Korea got huge amounts of PPSh-41s. They were also given the North Korean Type 49 and the Chinese Type 50. These were copies of the PPSh-41s with small changes. The PPSh-41 was used a lot during the entire Korean War. Though it was not very accurate, the PPSh-41 did well in close-range battles. These often happened in the Korean War, especially at night.[10] United Nations forces often had trouble with returning enough bullets when they were attacked by communists with the PPSh-41. Some U.S. infantry officers said that the PPSh-41 was the best gun of the war. It was not as accurate as the U.S. M1 Garand or M1 carbine. However, it gave more power at close range.[10]

The PPSh-41 fired the 7.62x25mm (Tokarev) bullet. The 7.62x25mm was the main Soviet pistol and submachine gun bullet. The PPSh-41 weighed around 12 pounds (5.45 kg) with a full 75-round magazine. It weighed 9.5 pounds (4.32 kg) with a loaded 35-round magazine. The PPSh-41 could fire 900 rounds per minute. This was very high compared to other submachine guns of World War II. The PPSh-41 did not have a grip on it. Because of this, the soldier usually had to hold the PPSh-41 behind the drum magazine. The soldier could also hold the bottom of the drum. 35-round box magazines could have been used from 1942. However, Soviet soldiers in World War II usually kept the 71-round drum magazine.[2]

Because the Germans had captured so many PPSh-41s, a program was started. In this program, the weapons would be altered to fire the German submachine gun bullet. This bullet was called the 9mm Parabellum. The Wehrmacht officially called these PPSh-41s the MP41(r). PPSh-41s which were not altered were called the MP717(r). They were given 7.63x25mm Mauser ammunition instead of the Soviet 7.62x25mm bullet. The German military made German-language manuals to teach soldiers how to use the PPSh-41. These were printed and given out across the Wehrmacht.[8]

During World War II, an even simpler submachine gun was brought in to service. It was called the PPS. However, it did not replace the PPSh-41 during the war. 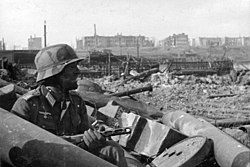