Taiwan, officially the Republic of China (ROC; Chinese: 中華民國; pinyin: Zhōnghuá Mínguó), is a region and country in East Asia. It is the nationalist government of China since its settlement in 1949. It is called the Republic of China (ROC) (also called Taiwan) which is a special region comprising the island of Taiwan and nearby islands (Pescadores islands and parts of Fujian). The ROC government led by Chinese Nationalist (Kuomintang abbreviated as KMT) moved to Taiwan after the Communist army took over the capital of Beijing. Currently, the ROC government governs Taipei, the capital of Taiwan. Taiwan is southeast of the People's Republic of China's mainland, south of Japan, and north of the Philippines.

Taiwan has also been called Formosa, a Portuguese name which means "beautiful" in Portuguese.

The largest cities in Taiwan are the capital, Taipei, and the port city of Kaohsiung.

Most people living in Taiwan (sometimes called Taiwanese) are Han. Taiwan has three large Han groups. They speak different dialects of Chinese and their ancestors came from different places: the Southern Fujianese (from China's Fujian Province), the Hakka (from China), and Mainlanders (from Mainland China after 1948).

There are also Taiwanese Aborigines who have lived in Taiwan before the Han came to live there.

Today, people who live in Taiwan have different ideas. Although many Taiwanese think there is no freedom in China, there are still some Taiwanese who want to be united again with China. The majority of the people in Taiwan want to keep everything like it is now.

Today most countries of the world recognize the People's Republic of China as China. Even though Taiwan is not recognized by the UN as a sovereign nation,[21] most countries still have close economic and cultural relations with Taiwan. So, both sides are not making any big changes from the political status quo. This policy was expressed in a 1992 Consensus among some leaders of both sides.

In March 2004, China's government passed a law called the Anti-Secession Law. The law requires the Chinese military to invade Taiwan immediately if they declare independence.[22] The law shows China's concern over a growing move towards independence by the government of Taiwan.[23] 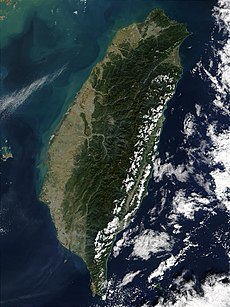 Taiwan is mostly mountainous in the east, with gently sloping plains in the west. The Penghu Islands are west of the main island.

Taipei City, the capital of Taiwan.

The largest cities in Taiwan are: