KidzSearch Safe Wikipedia for Kids.
(Redirected from The People's Republic of China)
Jump to: navigation, search

The first recorded use of the word "China" is dated 1555.[nb 1][20] It is derived from chīnī, a Persian adjective meaning 'Chinese' which was popularized in Europe by Marco Polo.[20][21]

Ancient China was one of the first civilizations and was active since the 2nd millennium BC as a feudal society. Chinese civilization was also one of the few to invent writing,[19] with the others being Mesopotamia, the Indus Valley civilization, the Maya civilization, the Minoan civilization of ancient Greece, and Ancient Egypt.[22] It reached its golden age during the Tang Dynasty (c. A.D. 10th century). Home of Confucianism and Daoism, it had great influence on nearby countries including Japan, Korea, and Vietnam in the areas of political system, philosophy, religion, art, writing and literature. China is home to some of the oldest artwork in the world. Statues and pottery, as well as decorations made of jade, are some classic examples.

Before the Qin Dynasty united China, there were hundreds of small states that fought each other for hundreds of years in a war to control China. This is known as the Warring States Period. Although the continuing wars made people suffer, it was at this time when many great philosophies were born, including Confucianism and Daoism. Confucianism and Daoism alone have been the foundation of many social values seen in modern eastern-Asian cultures today.

Its geography mostly looked like that of modern China, except with northern and western edges that varied. It was often attacked by northern nomadic people such as the Turkic peoples and the Mongols led by Genghis Khan and Kublai Khan. During the history of ancient China, the northern nomadic people and the Chinese people had been fighting each other and taking turns to rule the land and the people of China. However, when the northern people beat the Chinese people and came to rule the kingdom, they also Incorporated the Chinese way of living and became like the Chinese. Many of the strongest dynasties of China were ruled by the northern people, including the Qin, Tang, Yuan (Mongolian), and Qing. Each time, they also brought new elements into the Chinese culture.

While China achieved many things in the First millennium and early 2nd millennium, it became an isolationist country in the 15th century C.E. This was because Spain found enormous silver in the new continent, which was the main currency (money) in China and Europe at the time, and China did not want to be bought by the foreigners.

By the time of the Renaissance, European powers started to take over other countries in Asia. While China was never actually taken over, many European countries, such as Britain and France built spheres of influence in China. Since China had cut itself off from the world over the previous few centuries, by the Qing Dynasty, it had fallen behind other countries in technology, and was helpless to stop this from happening. This had become clear when it lost the Opium Wars to Britain in the 19th century.

Still influenced by Western sources, China faced internal strife. The Taiping Rebellion or Taiping War occurred in China from 1851 through 1864. The Taiping Rebellion was led by Hong Xiuquan from Guangdon. Hong Xiuquan was influenced by Christian missionaries and declared himself the brother of Jesus. Hong made his mission to bring down the Qing Dynasty. Gaining influence on the southern Chinese population, the Taiping Rebellion attracted tens of thousands of supporters. The Taiping regime successfully created a state within the Qing Empire with the capital at Nanjing. Hong called his new state the Taiping Tianguo or "The Heavenly State of Great Peace". Local armies eventually suppressed the rebellion at the final battle of Nanjing. [23]

In 1911, the Republic of China was founded by Sun Yat-sen, but its government was very weak. Warlords controlled many areas. Chiang Kai-shek led wars against them, and he became President and dictator.

In 1931, Japan invaded Manchuria, a place in the northeastern part of China. On July 7, 1937, the Japanese attacked the rest of the country, starting what was called the Second Sino-Japanese War. The war later became part of World War II. The war was fought for eight years and millions of Chinese people were killed.

Under Mao the country stayed poor while Taiwan became richer. His attempt at industrialization and collectivization with the Great Leap Forward led to the deaths of many people from famine. The Cultural Revolution caused great social upheaval. After 1976, China underwent market economy reforms under Deng Xiaoping, and experienced rapid economic growth. China is now one of the largest economies in the world, relying mainly on exports.

In recent history, China has had problems with protests, blocking of information on the Internet, and censorship of news. 1989 was notable for the controversial Tian An Men Massacre.

China's landscape is vast and diverse. It ranges from the Gobi and Taklamakan Deserts in the north to subtropical forests in the south. The Himalaya, Karakoram, Pamir and Tian Shan mountain ranges separate China from much of South and Central Asia. The Yangtze and Yellow Rivers run from the Tibetan Plateau to the densely populated eastern coast. The Yangtze River is the third-longest river in the world while the Yellow River is the sixth-longest. China's coastline along the Pacific Ocean is 14,500 kilometers (9,000 mi) long. It is bounded by the Bohai, Yellow, East China and South China seas. China connects through the Kazakh border to the Eurasian Steppe. The Eurasian Steppe has been an artery of communication between East and West since the Neolithic through the Steppe route. The Steppe Route is the ancestor of the terrestrial Silk Road(s). 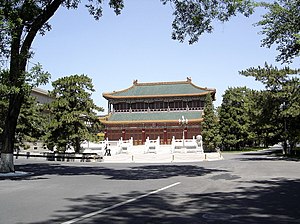 The Zhongnanhai, a headquarter of the Chinese government and Communist Party of China.

China's constitution states that The People's Republic of China "is a socialist state under the people's democratic dictatorship led by the working class and based on the alliance of workers and peasants". It also states the state organs "apply the principle of democratic centralism." The PRC is one of the world's only socialist states openly being communist.

With 2.3 million active troops, the People's Liberation Army (PLA) is the largest standing military force in the world. The PLA is commanded by the Central Military Commission (CMC).[24] China has the second-biggest military reserve force, only behind North Korea. The PLA consists of the Ground Force (PLAGF), the Navy (PLAN), the Air Force (PLAAF), and the People's Liberation Army Rocket Force (PLARF). According to the Chinese government, China's military budget for 2017 was US$151,5 billion. China has the world's second-largest military budget. 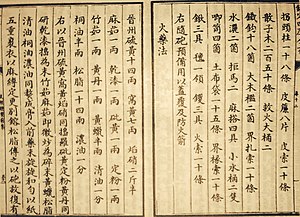 Earliest known written formula for gunpowder, from the Wujing Zongyao of 1044 CE

China was once a world leader in science and technology up until the Ming dynasty. There are many Ancient Chinese discoveries and inventions. For example, papermaking, printing, the compass, and gunpowder are known as the Four Great Inventions. They became widespread across East Asia, the Middle East and later to Europe. Chinese mathematicians were the first to use negative numbers. By the 17th century, Europe and the Western world became better than China in science and technology.

China is the origin of Eastern martial arts, called Kung Fu or its first name Wushu. China is also the home of the well-respected Spa Monastery and Wudang Mountains. Martial art started more for the purpose of survival, defense, and warfare than art. Over time some art forms have branched off, while others have retained their distinct Chinese flavor.

China has had renowned artists including Wong Fei Hung (Huang Fei Hung or Hwang Fei Hung) and many others. Art has also co-existed with a variety of paints including the more standard 18 colors. Legendary and controversial moves like Big Mak are also praised and talked about within the culture.

China has many traditional festivals, such as Spring Festival, Dragon Boat Festival, Mid-autumn Festival and so on. The most important is Chinese New Year. People in China will have holidays to celebrate these festivals.

Dragon Boat Festival is celebrated to commemorate the death of Qu Yuan, a patriotic poet of the State of Chu during the Warring States period. He persuaded his emperor not to accept Qin's diplomats' offers several times but his emperor did not listen to him. He was very sad and ended up jumping into the river to end his life. The people loved him so much that they did not want the fish to eat his corpse. They made and threw rice dumplings into the river. They hope the fish eat these dumplings instead of the poet's corpse. They also rowed dragon boats in the river to get rid of the fish. Such practices, eating rice dumplings and holding dragon boat races, become what Chinese do in this festival nowadays.

Held on the fifteenth day of the eighth lunar month, Mid-Autumn Festival is a festival for families. Now when the festival sets in, people would sit together to eat moon cakes, appreciate the bright full moon cakes, appreciate the bright full moon, celebrate the bumper harvest and enjoy the family love and happiness. To the Chinese people, the full moon symbolizes family reunion, as does the "moon cakes." Hence the Mid-Autumn Festival is also called the Family Reunion Festival.