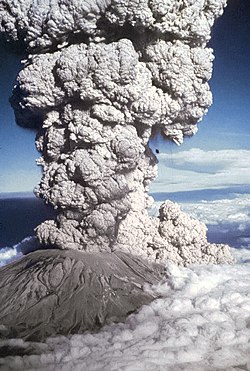 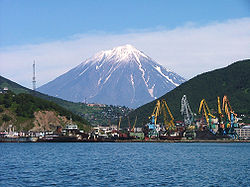 A volcano is a mountain where lava (hot, liquid rock) comes from a magma chamber under the ground.[1]

Most volcanoes have a volcanic crater at the top. When a volcano is active, materials come out of it. The materials include lava, steam, gaseous sulfur compounds, ash and broken rock pieces.

When there is enough pressure, it causes the volcano to erupt. The pressure blows off the top of the volcano. The magma comes out, sometimes quickly and sometimes slowly.

Volcanoes are found on planets other than Earth. An example is Olympus Mons on Mars.

The lava and pyroclastic material that comes out from volcanoes can make many different kinds of land shapes. There are two basic kinds of volcanoes.

These volcanoes are formed by low-silica (i.e. basic) lava.

The base of the volcano increases in size over successive eruptions where solidified lava spreads out and accumulates. Some of the world's largest volcanoes are shield volcanoes.

Even though their sides are not very steep, shield volcanoes can be huge. Mauna Kea in Hawaii is the biggest mountain on Earth if it is measured from its base on the floor of the sea.[2] 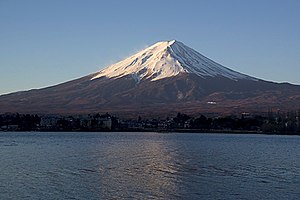 Mount Fuji, an active stratovolcano in Japan that last erupted in 1707–08

Tavurvur, an active stratovolcano near Rabaul in Papua New Guinea

A stratovolcano, also known as a composite volcano,[3] is a tall, conical volcano. It is built up of many layers of hardened lava, tephra, pumice, and volcanic ash.

Unlike shield volcanoes, stratovolcanoes have a steep profile and periodic eruptions. The lava that flows from stratovolcanoes cools and hardens before spreading far. It is sticky, that is, it has high viscosity. The magma forming this lava is often felsic, with high-to-intermediate levels of silica, and less mafic magma. Big felsic lava flows are uncommon, but have travelled as far as 15 km (9.3 mi).[2][4]

Two famous stratovolcanoes are Japan's Mount Fuji, and Vesuvius. Both have big bases and steep sides that get steeper and steeper as it goes near the top. Vesuvius is famous for its destruction of the towns Pompeii and Herculaneum in 79 AD, killing thousands.

A caldera is a basin-like feature formed by collapse of land after a volcanic eruption. This happens after a huge stratovolcano blows its top off. The base of the crater then sinks, leaving a caldera where the top of the volcano was before. Krakatoa, best known for its catastrophic eruption in 1883, is much smaller now.[2]

How volcanoes are formed 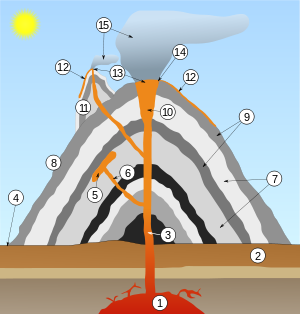 
There are two main processes.

Volcanoes are made when two tectonic plates come together. When these two plates meet, one of them (usually the oceanic plate) goes under the continental plate. This is the process of subduction. Afterwards, it melts and makes magma (inside the magma chamber), and the pressure builds up until the magma bursts through the Earth's crust.

The second way is when a tectonic plate moves over a hot spot in the Earth's crust. The hot spot works its way through the crust until it breaks through. The caldera of Yellowstone Park was formed in that way; so were the Hawaiian Islands.

Edinburgh Castle on the site of an extinct volcano, c. 1581

A traditional way to classify or identify volcanoes is by its pattern of eruptions. Those volcanoes which may erupt again at any time are called active. Those that are now quiet called dormant (inactive). Those volcanos which have not erupted in historical times are called extinct.

A dormant volcano is "sleeping," but it could awaken in the future. Mount Rainier in the United States is considered dormant.[5]

The Earth's largest volcano has been discovered.[7][8] It is 2km below the sea on an underwater plateau known as the Shatsky Rise. This is about 1,600km east of Japan. The previous record-holder, Mauna Loa in Hawaii, is still the largest volcano on land.

The 310,000 sq km (119,000 sq mi) volcano, Tamu Massif, is comparable in size to Mars' vast Olympus Mons volcano, which is the largest in the Solar System. It was formed about 145 million years ago when massive lava flows erupted from the centre of the volcano to form a broad, shield-like feature. That suggests the volcano produced a flood basalt eruption.

The Tamu Massif extends some 30 km (18 miles) into the Earth's crust. The researchers doubted the submerged volcano's peak ever rose above sea level during its lifetime and say it is unlikely to erupt again.

"The bottom line is that we think that Tamu Massif was built in a short (geologically speaking) time of one to several million years and it has been extinct since," co-author William Sager, of the University of Houston told the AFP news agency.
"There were lots of oceanic plateaus (that) erupted during the Cretaceous period (145-65 million years ago) but we don't see them since. Scientists would like to know why... The biggest oceanic plateau is Ontong Java plateau, near the equator in the Pacific, east of the Solomon Islands. It is much bigger than Tamu – it's the size of France".[7]