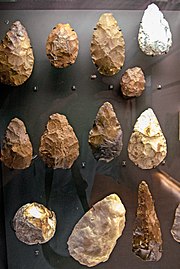 A group of typical hand axes

Stone tools were not only made by our own species, Homo sapiens. They were made by all previous members of the genus, starting with relatively crude tools made by Homo habilis and Homo erectus. In Europe, the large-brained Neanderthal Man (Homo neanderthalensis) made tools of high quality, and was in turn outshone by the many tools made by our own species. These tools are the first cultural products which have survived.[3][4]

The Palaeolithic dates from about 2.6 million years ago [2][5] and ended around 15,000BC with the Mesolithic in Western Europe, and with the Epipaleolithic in warmer climates such as Africa.[6][7][8] The Palaeolithic age began when hominids (early humans) started to use stones as tools for bashing, cutting and scraping. The age ended when humans began to make small, fine tools (Mesolithic) and finally when plant crops and have other types of agriculture (Neolithic). In some areas, such as Western Europe, the way that people lived was affected by the Ice age. The move towards agriculture started in the Middle East.

During the Palaeolithic Age humans grouped together in small bands. They lived by gathering plants and hunting wild animals.[9] As well as using stone tools, they used tools of wood and bone. They probably also used leather and vegetable fibers but these have not lasted from that time. 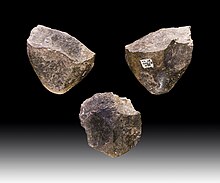 An Oldowan pebble tool, the most basic of human stone tools

The Oldowan is the archaeological term used to refer to the stone tool industry that was used by Hominids during the earliest Palaeolithic period. The Oldowan is the earliest stone tool industry in prehistory, from 2.6 million years ago up until 1.7 million years ago. It was followed by the more sophisticated Acheulean industry. Oldowan tools were therefore the earliest tools in human history, and mark the beginning of the archaeological record. The term "Oldowan" is taken from the site of Olduvai Gorge in Tanzania, where the first Oldowan tools were discovered by the archaeologist Louis Leakey in the 1930s.

It is not known for sure which species actually created and used Oldowan tools. It reached its peak with early species of Homo such as H. habilis and H. ergaster. Early Homo erectus appears to inherit Oldowan technology and refines it into the Acheulean industry beginning 1.7 million years ago.[10] Oldowan tools are sometimes called pebble tools, so named because the blanks chosen for their production already resemble, in pebble form, the final product.[11] Oldowan tools are sometimes subdivided into types, such as chopper, scrapers and pounders, as these seem to be their main uses.[12]

Acheulean is the industry of stone tool manufacture by early humans of the Lower Palaeolithic era in Africa and much of West Asia and Europe. Acheulean tools are typically found with Homo erectus remains. They are first developed out of the more primitive Oldowan technology some 1.8 million years ago, by Homo habilis.

It was the dominant technology for most of human history. More than a million years ago Acheulean tool users left Africa to colonize Eurasia.[3] Their oval and pear-shaped hand axes have been found over a wide area. Some examples were finely made. Although it developed in Africa, the industry is named after the type site of Saint-Acheul, now a suburb of Amiens in northern France where some of the first examples were found in the 19th century.

John Frere was the first to suggest in writing a very ancient date for Acheulean hand-axes. In 1797 he sent two examples to the Royal Academy in London from Hoxne in Suffolk. He had found them in prehistoric lake deposits along with the bones of extinct animals and concluded that they were made by people "who had not the use of metals" and that they belonged to a "very ancient period indeed, even beyond the present world". His ideas were ignored by his contemporaries however, who held a pre-Darwinian view of human evolution.

An Acheulean handaxe from Zamora

Radiometric dating, often potassium-argon dating, of deposits containing Acheulean material is able to broadly place Acheulean techniques from around 1.65 million years ago[4] to about 100,000 years ago.[5] The earliest accepted examples of the type, at 1.65 m years old, come from the West Turkana region of Kenya[6]. Some think their origin might be as early as 1.8 million years ago.[7]

In individual regions, this dating can be considerably refined; in Europe for example, Acheulean methods did not reach the continent until around 400 thousand years ago and in smaller study areas, the date ranges can be much shorter. Numerical dates can be misleading however, and it is common to associate examples of this early human tool industry with one or more glacial or interglacial periods or with a particular early species of human. The earliest user of Acheulean tools was Homo ergaster who first appeared about 1.8 million years ago. Some researchers prefer to call these users early Homo erectus.[8] Later forms of early humans also used Acheulean techniques and are described below.

There is considerable time overlap in early prehistoric stone-working industries. In some regions Acheulean tool-using groups were contemporary with other, less sophisticated industries such as the Clactonian.[9] Then, later, Acheulean tools occur at the same time as the more sophisticated Mousterian. The Acheulean was not a neatly defined period, but a tool-making technique which flourished especially well in early prehistory. Acheulean was a basic method for making stone tools which was shared across much of the Old World.

A huge Clactonian core made of quartzite. Quite small flakes would be struck off it.

The Clactonian is an industry of European flint tool manufacture that dates to the early part of the interglacial period 400,000 years ago.[13] Clactonian tools were made by Homo erectus rather than modern humans. Early, crude flint tools from other regions using similar methods are called either Clactonian or core & flake technology.

The Clactonian is named after finds made at Clacton-on-Sea in the English county of Essex in 1911. The artefacts found there included flint chopping tools, flint flakes and the tip of a worked wooden shaft along with the remains of a giant elephant and hippopotamus. Further examples of the tools have been found at sites in Swanscombe, Kent, and Barnham in Suffolk; similar industries have been identified across Northern Europe.

The Clactonian industry involved striking thick, irregular flakes from a core of flint, which was then employed as a chopper. The flakes would have been used as crude knives or scrapers. Unlike the Oldowan tools from which Clactonian ones derived, some were notched implying that they were attached to a handle or shaft.

The Clactonian industry may have co-existed with the Acheulean industry (which used handaxes). However, in 2004 there was an excavation of a butchered Pleistocene elephant near Dartford, Kent. Archaeologists recovered numerous Clactonian flint tools, but no handaxes. Since handaxes would be more useful than choppers to dismember an elephant carcass, this is evidence of the Clactonian being a separate industry. Flint of sufficient quality was available in the area, so probably the people who carved up the elephant did not have the knowledge to make handaxes. 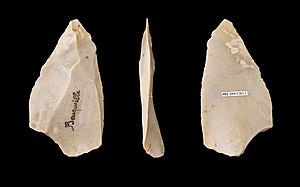 The Mousterian is an industry of stone tools associated with Neanderthal Man, Homo neanderthalensis. It dates from about 300,000 years to about 30,000 years ago. There are up to thirty types of tools in the Mousterian as contrasted with about six in the Acheulean.

The Mousterian was named after the type site of Le Moustier, a rock shelter in the Dordogne region of France.[14] Similar flintwork has been found all over unglaciated Europe and also the Near East and North Africa. Handaxes, long blades and points typify the industry. Overall, the items are more perfectly finished than any previous work. The method used to get the blades and flakes is called the Levallois technique. It is a prepared-core technique: the core is worked on so that a long, fine blade can be struck off. For this quality of work, a 'soft' hammer made of something like deer antler is necessary, rather than a stone hammer. The extra brain size of the Neanderthals is probably relevant to these advances.

The cultures which follow the Mousterian are all cultures of modern humans, Homo sapiens. It is characteristic of our species to produce many more tools, all specialised for particular tasks. There are at least 100 types of tools in the Upper Palaeolithic compared to a maximum of 30 tools in the Mousterian.

Chronology of Palaeolithic and following periods

The Palaeolithic is sometimes divided into three (somewhat overlapping) periods which mark technological and cultural advances in different human communities:

After the Palaeolithic follows the Mesolithic and Neolithic eras, which marks the end of Stone Age. The Bronze Age and the Iron Age come right after the Stone Age.

Overview of the main features of these periods

The Venus of Willendorf is a well-known figurine. It was made about 25.000 years ago. Possibly among the earliest traces of art are Venus figurines. These are figurines (very small statues) of women. The figurines were found in areas of Western Europe to Siberia. Most are between 20,000 and 30,000 years old. Two figurines have been found that are much older: the Venus of Tan-Tan, dated to 300,000 to 500,000 years ago was found in Morocco. The Venus of Berekhat Ram was found on the Golan Heights. It has been dated to 200,000 to 300,000 years ago. It may be the one of the earliest things that show the human form.

Different kinds of stone, bones and ivory were used to make the figurines. Some are also made of clay which was then burned in a fire. This is one of the earliest known traces of the use of ceramics.

Today it is not known what the figurines meant to the people who made them. There are two basic theories:

The two figurines that are older may have mostly formed by natural processes. The Venus of Tan-Tan was covered with a substance that could have been some kind of paint.[16] The substance contained traces of iron and manganese.[16] The figurine of Berekhat Ram shows traces that someone worked on it with a tool. A study done in 1997 states that these traces could not have been left by nature alone.[17]

Cave paintings are paintings that were made on the walls or roofs of caves. Many cave paintings belong to the Palaeolothic Age, and date from about 15,000 to 30,000 years ago. Among the most famous are those in the caves of Altamira in Spain and Lascaux in France.[3]p545 There are about 350 caves in Europe where cave paintings have been found. Usually, animals have been painted, like aurochs, bisons or horses. Why these paintings were done is not known. They are not simply decorations of places where people lived. The caves they were found in usually do not show signs that someone lived in them. 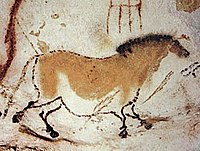 Some archaeologists have questioned the dating. Züchner believe the two groups date from 23,000–24,000, and 10,000–18,000 years ago.[21] Pettitt and Bahn believe the dating is inconsistent. They say the people at that periods of time painted things differently. They also do not know where the charcoal used to paint some things is from, and how big the painted area is.[22]

People from the Palaeolithic era drew well. They knew about perspective, and they knew of different ways to draw things. They also were able to observe the behaviour of animals they painted. Some of the paintings show how the painted animals behaved. The paintings may have been important for rituals.