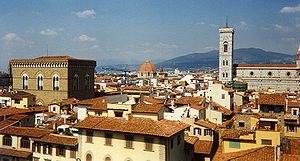 Florence (Italian: Firenze) is the capital city of the region of Tuscany (Toscana), in Italy. From 1865 to 1870 the city was also the capital of the Kingdom of Italy. Florence is on the Arno River. The city has a population of around 400,000 people, and a suburban population of over 2,000,000 persons. The greater area has some 956,000 people. The city was a center of medieval European trade and finance. It is often considered the birthplace of the Italian Renaissance and was long ruled by the Medici family. Florence is also famous for its fine art and architecture. It is said that, of the 1,000 most important European artists of the second millennium, 350 lived or worked in Florence.

The football team of Florence is the Fiorentina.

The food of Florence is based more on peasant eating rather than expensive cooking. Most of foods are based on meat. The whole animal was usually eaten. Many kinds of tripe, (trippa) and (lampredotto) were commonly served. They are still sold at the food carts in the city. Antipasti include crostini toscani, sliced bread topped with a chicken liver-based pâté. Also common are sliced meats (mainly prosciutto and salami). They are often served with melon when it is in season. Tuscan bread has no salt or butter. It is used often in Florentine meals. It is very common in the local soups, ribollita and pappa al pomodoro, Both soups are usually served with local olive oil. The bread is also used in the salad of bread and fresh vegetables called panzanella that is served in summer. The most famous main course is the bistecca alla fiorentina. It is a huge steak of Chianina beef that is cooked over hot charcoal. It is served very rare with the tagliata, sliced rare beef served on a bed of arugula, often with slices of parmesan cheese on top.

Florence has a mixed Mediterranean climate and humid subtropical climate, with hot and humid summers and cool and damp winters. Florence is especially hot from June to August (surrounded by hills in a valley cut by the Arno river). Summer temperatures are higher than those along coastlines. Winter has some snow.

Panorama of Florence's skyline as seen from Piazzale Michelangelo

Panorama of the Ponte Vecchio and the Arno in Florence, taken from the north side of the river - October, 2006.

Ponte Vecchio and the surrounding buildings on the Arno.