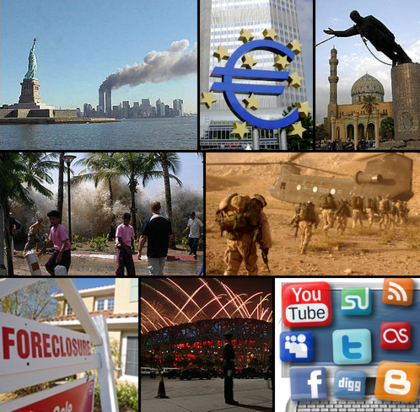 From left, clockwise: The World Trade Center on fire and the Statue of Liberty during the 9/11 attacks in 2001; the euro currency starts being used in 2002; a statue of Saddam Hussein being pulled down during the Iraq War in 2003; U.S. troops going towards an army helicopter in Afghanistan during the War on Terror; social media through the Internet starts being used across the world; a Chinese soldier looks at the 2008 Summer Olympics starting in Beijing; an economic crisis, the largest since the Great Depression, hits the world in 2008; a tsunami from the Indian Ocean earthquake kills over 230,000 in 2004.